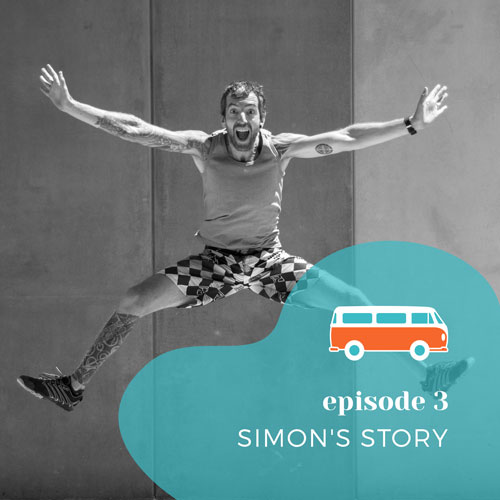 Episode 3: Wheeling your Way to Success

Bree: It doesn’t get much worse than breaking a bone. But what about breaking two bones at the same time the week before starting a new job?

This is exactly what happened to Simon. But as painful and shocking as it sounds, Simon’s attitude is far from sad or disappointed. On today’s episode, Simon shares his story of how a night of singing karaoke turned into 6 weeks in a wheelchair. We’ll hear how he used this experience as a starting point for a new life as an entrepreneur in Barcelona. We’re calling this story, ‘Wheeling your way to success’.

Before we begin listening, let’s talk about some of the vocabulary and expressions you’ll hear Simon say:

A quick note on pronunciation and accents. We recorded this interview online with Simon so you may notice the sound quality isn’t as clear as we would like it to be. Try to listen closely to Simon’s Yorkshire, British accent and you may hear him cutting off the last letters of a word for example ‘Manchest-ah’ instead of ‘Manchest-ER’ or dropping the ‘h’ at the beginning of a word for example ‘ome’ instead of ‘Home’.

If you need some more help with understanding Simon’s story, remember for each episode, you can get a full vocabulary list and listening comprehension activities on our website acingles.com, that’s la letra a, letra c, ingles punto com. And one last note here, this story deals with themes related to alcohol so if you’re with younger listeners you may want to skip this one. OK let’s get into the story…

Simon: Many years ago, in Manchester, to celebrate finishing my first attempt at having a job where I’d worked full time for a year, after finishing being a full-time student and hadn’t really enjoyed very much. Good idea would be that I quit this job and get another job that pays a lot of money. I was going to be a team leader for Barclay Card, a credit card company. So any way, to celebrate escaping from the previous job, which had been a team leader at Ticketmaster, I decided to go out for a drink which was like the tradition in England. Well, you notice a big difference when you first move to Spain, the very sensible drinking culture that they have here of drinking a very small beer, very slowly. Whereas in England, we have the very unhealthy habit, as you’ll see, of drinking a very large beer very quickly and then repeating this process multiple times until you are very drunk.

We ended up in a karaoke bar, finished the night by singing ‘I Did It My Way’ by Frank Sinatra and then, I had this kinda ‘Frank Sinatra’ style vibe going on the drunkenness, and on leaving the bar thought, ‘oh a good idea would be to climb up on top of that shipping container and do a sort of Frank Sinatra style dance on top of the shipping container’, which I did, I’m sure… very well. What failed me was the landing skills because when I jumped off the shipping container, being very very drunk, I failed to recognise the floor approaching rapidly and I didn’t like, absorb the landing in anyway. So I kinda landed with straight legs and smashed into the pavement… which hurt… which should be a sign if you feel pain after probably like 12 pints of strong ale, this is probably a sign, if this happens to anybody else in the future, that you should go immediately to the hospital. But I didn’t because we had a big party planned and I was DJing at the party so I was like, ‘no, we must go on!’.

So I managed to get to the bus with the aid of some friends, kinda arms over the shoulder of the friends… get on the bus to where we going. When we got off the bus at the other side. It was like really hurting. Maybe kinda the adrenaline was fading, the alcohol was fading.   I was like, ‘oh I don’t think I can walk any further’. So my equally drunk friends, also heading to the party with me, had the amazing idea of… we saw this big like… in the UK outside the pubs they have these massive bins on wheels where they put all the bottles, empty bottles. So they took the empty bin, set me on top of the bin and wheeled me about one kilometer back to the party where I was DJing and just kinda abandoned this bottle bin out on a nice residential family street in the suburbs of Manchester. Fortunately, I managed to DJ. Being quite tall, I’m like 6ft 2, 188 cm, I was able to DJ kneeling… just kind of reaching up to the decks. So the party was saved!

The next thing where they was waking up the next morning. The first thing I noticed was the pain in my head and then on trying to get out of the bed and stand up, the screaming pain in the ankles and then I looked at my ankles and they were watermelons. So I had to kinda crawl down the stairs and then say to my friend, well my flatmate, who had a car, ‘I think you need to drive me to the hospital’.

The nurse is like, ‘oh can you just walk up and down for me?’

So I was like trying to walk up and down and was like, ‘oh this really hurts’.

‘So who is your GP?’ Like your general practitioner. But being from Yorkshire, Yorkshire men don’t go to the doctor so I had never been to the doctor and had never registered with a GP. So I didn’t have one. And they were like… ‘oh you don’t have one? But you need a GP in order to get a wheelchair. The wheelchair is provided by your GP, not from the hospital’.

I was like, ‘oh what do I do then?’. They literally disappeared for like 2 hours and then they came back and they had a pair of crutches. I was like, ‘a pair of crutches!? But you told me before that it was absolutely imperative that I couldn’t bear weight on either leg. So if you’ve ever tried to use crutches without putting either leg on the floor, it’s quite a… difficult process.

And then on the Monday, well, what I thought was going to be well, an embarrassing thing, was the thought of having to call the new job and tell them, ‘just to warn you, hopefully, if I can find one, hopefully I’ll be coming in… in a wheelchair.’

But when I rang them they said, ‘ah slight problem there in that the building, it’s an old building, is not wheelchair accessible’. So that was the first realisation of, ‘oh dear I’m now unemployed’.

And then having to ring, kinda, the social security place to say, ‘oh look, I’ve just finished my job. I had a new job lined up but I’ve broken both my legs. Is there anything I can do?’

‘Well, you’ll have to come down to the office?’

And then when I finally manage to make it down to the office, kinda the social security office after finally having found a wheelchair and dragging myself down there. They told me, ‘you haven’t paid enough social security in however many years’… because I was a student basically, ‘so you aren’t entitled to claim anything’.

I was wheelchair bound for 6 weeks and then on crutches for about, I think another 6 weeks after that. I mean on the bright side, I was doing a part-time Masters at the time, which I had made zero progress on before having broken my legs. So I think the only reason I completed the masters was because I was stuck in the house for six weeks. So that was a bonus and I watched many many DVD box sets.

So the first day that I got out of the wheelchair and had the cast taken off, I mean it was a bit of a shock because literally I couldn’t stand up by myself. Getting about was still a considerable challenge. I mean I am kinda that person, that kind that has that glass is always half full kinda perspective. So I rehabilitated myself from the broken legs and then got really into strength training and fitness training. I hated the first job I did.

You know and I think there was a lot of built up tension there released in this cathartic experience. Perhaps it was some unconscious way of saying, ‘don’t do this, don’t do this again’ and I perhaps unconsciously broke both my legs to try and sabotage going to another 9 to 5 office job. But it didn’t quite work. So after that, I worked 1 more year, exactly 1 year before quitting and saying no more of this and then ended up qualifying as a personal trainer and then quit my second job to start a personal training business and working for myself. I read a book called the ‘4 Hour Work Week’, by this American author Tim Ferris, which was like about how to make a living but that requires very little input in terms of time, so like 4 hours a week, a rough guideline, and that you can do from anywhere. The kinda digital nomad lifestyle. Umm… So I read this book, started these kinda online businesses, which gave me the freedom to move around, which is more incentive to keep both legs functioning. 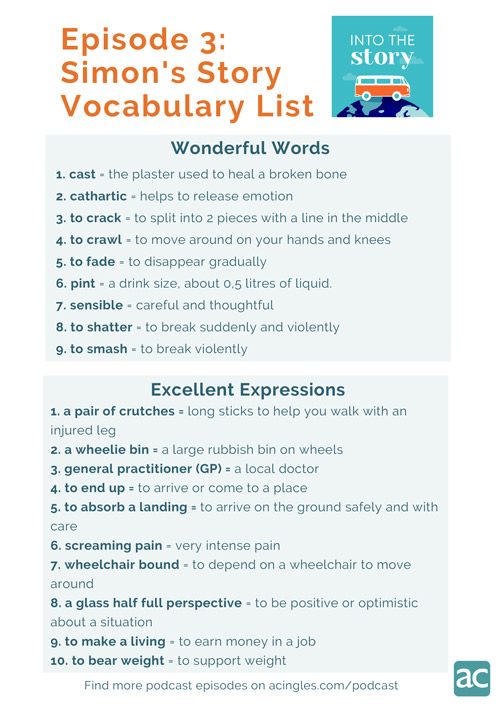 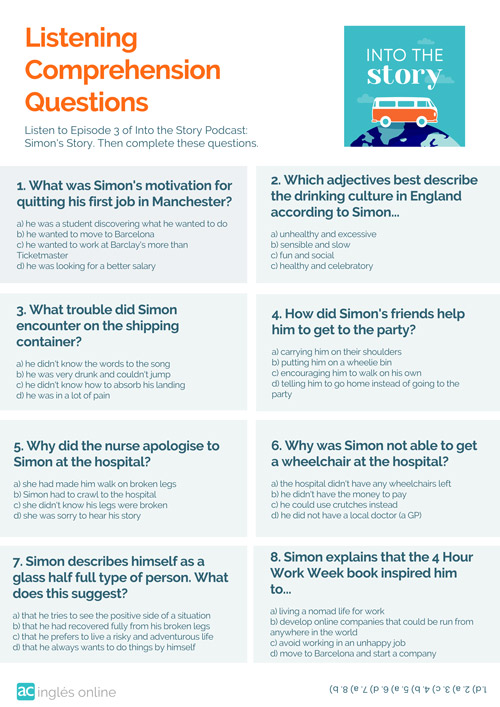 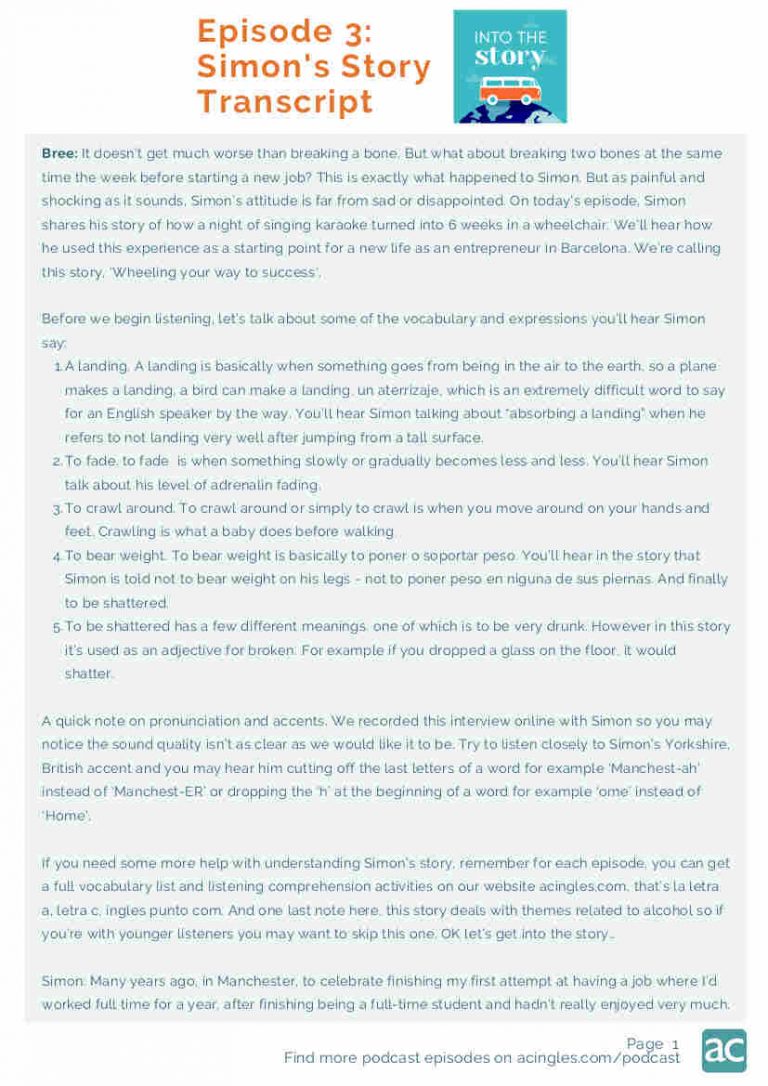