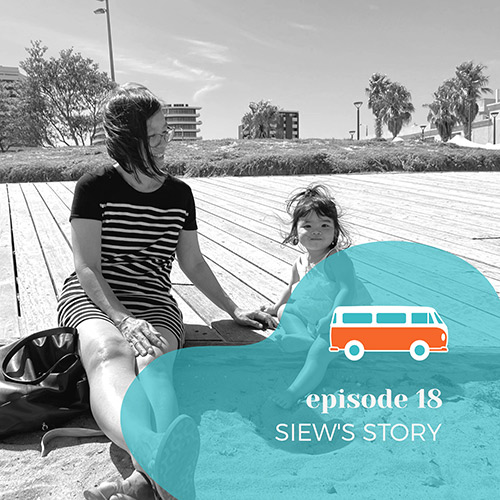 Bec: Hi there. It’s Bec here from AC Ingles. Most of the time, I’m helping out behind the scenes of the podcast but I’m here to introduce a very special guest on today’s episode of Into the Story. Today you’ll hear a story from my mum, Siew.

In today’s story, my mum shares some curious memories from her childhood in the 1960s growing up in Malaysia as one of 60 grandchildren. Yes that’s right…60!

In today’s episode, my mum describes life as part of a big family including the excitement over dinner time at her grandparents’ house and the day she and her cousins discovered a giant python in the backyard eating their pet chickens. You’ll also hear my mum share her reflections on changing family values and her grandfather’s role as the husband of 2 wives and the father of 21 children. It’s amazing to think about how cultures, lifestyles and ideas evolve from one generation to the next and my mum’s story today is just one fascinating example of this. We’re calling today’s story, ‘The Great Thing about Grandparents’.

Before we begin listening, let’s talk about some of the vocabulary and expressions you’ll hear my mum Siew use:
Firstly, a brat. A brat is a name that we usually use in English to describe a child who is behaving badly. En español diríamos, un niño travieso o un niño consentido. You’ll hear my mum say that she was a brat when she was younger.
Next a tomboy. This is another description that my mum uses to talk about her character as a child. The word tomboy describes a girl who enjoys rough, physical or noisy activities that traditionally are associated with boys. My mum describes herself as a tomboy because she liked to climb trees and play outside in the dirt.
The next word is jewel. A jewel is a precious stone. For example diamonds are jewels. In her story however, mum uses the word jewel to refer to a traditional dish that her grandfather used to prepare at Chinese New Year called the 8 jewel duck. In this case the 8 jewels are the 8 ingredients that are used as the stuffing – el relleno – of the duck.
Squawk – The word squawk spelt S-Q-U-A-W-K can be used as both a verb and a noun. This word refers to the loud noise that bird makes – se diría un graznido en español. Listen out for my mum describing the chickens squawking loudly and reacting to the snake in their pen.
Finally muck around. To muck around is a phrasal verb that we use to describe when someone behaves or plays in a silly way with no real objective. For example your parents might say to you ‘stop mucking around and go and do your homework.’ En español se puede decir hacer el tonto. You’ll hear mum talk about mucking around with her cousins in the garden of her grandparents’ house.

As alway if you need more help with understanding the podcast, you’ll find a full transcript, vocabulary list, and listening comprehension activities on our website acingles.com/podcast. OK let’s get into the story…

Siew: My name is Siew Yeen Chai and I’m currently living in Melbourne Australia. But I was not born here. I was born in a small mining town called Ipoh in Malaysia. So Ipoh is a small little mining town that it has a large population of millionaires because these people made their wealth out of mining for tin and they are generally migrants that have moved from the south of China to Malaysia to seek their wealth.

I come from a very big family. My grandfather has 21 children and I have more than 60 cousins so we had a really good time. I had a fantastic childhood growing up in Ipoh. I was a brat. I was a tomboy who loved to climb trees and roll around in the dirt and go fishing and ride my bicycle everywhere. It is also important to note that my grandfather had 21 children because he has two wives. So my grandmother is the first wife and she had 14 children with him but then he thought he would bring in a second wife because it was fashionable in those days for young successful Chinese men to have more than one wife. So he went back to China and brought over another wife which is my second grandmother.

My grandfather migrated from China to Malaysia and as a cook and he worked as a cook in the tin mine before he made enough money to buy the tin mine and became the owner of the mine itself. So my grandfather is a man full of contradictions I feel because he is a traditional man in that he loved his children but more so favoring his sons rather than his daughter. Women take the secondary role of caring for the children and nurturing and are meant to be seen and not heard. He also has very modern views in that although he favors his son over his daughters he believed in educating all his children and my mother and all my aunties were lucky enough to have received a formal education all the way to college and university.

And another contradictory trait of my grandfather is that he loved to cook. So generally cooking is seen as the woman’s domain. His house had an open kitchen on the outside in the open air and it’s built on concrete and the concrete has got a place where you can place the wood and generate the fire and the pan is placed on top of that and of course to accommodate a wok that is more than one meter in diameter the stove has to be fairly large as well so it’s the size of a small room. I remember one year for Chinese New Year he cooked us this really famous dish called 8 jewel duck for the first time. He deep-fried the duck in oil and then he stuffed the duck with 8 different delicacies that included lotus seeds that included lotus root as well as longan which is a Chinese fruit that is really sweet and so he used to stuff this duck with the eight delicacies and that’s why they’re known as the eight jewel. He would have prepared about 6-7 ducks to feed the whole family and I remember it very vividly because it’s the best tasting dog I have ever tasted in my life. When my grandfather cooks, all the children hang around the kitchen waiting for little tidbits to fall off the stove so that we can pick it up and eat it.

My grandparents lived in a really big house that has about 10 bedrooms and it is a typical mansion in a tropical country where the house is surrounded by a verandah on the outside all around the house with an orchard at the side. One Saturday afternoon it was a really hot day and I was playing with a whole group of my cousins and we were just squirting each other with water running around the garden when we heard a loud commotion coming from the chicken pen inside the orchard. And we could hear chickens squawking and carrying on and we could see feathers flying out from the chicken pen. So my cousins and I, there were about 10 of us, ran into the orchard and peeped into the chicken pen. We could see this shadow of a long slim cylindrical shape moving very slowly and when we moved closer we could see the shape, the cylindrical shape, was actually that of a giant snake that’s almost three meters long and this giant snake was trying to swallow a live chicken. We were terrified so we ran screaming away from the chicken pen screaming for the gardener to come and kill the snake and so the gardener came with his torch and a giant stick. So he came and shone his torch into the chicken pen and we could see the snake swallowing up the whole chicken and I could, we could see this bulge around his top part of his body and it was still wriggling and writhing around inside his body. The gardener laughed and he said that this snake would be harmless for the next few days and true enough this snake lay dormant inside the chicken pen for the next two days trying to digest this chicken that he had just swallowed whole.

I had such a good time when I was a child. It was so carefree. We just played like children mucked around like children and spent a lot of quality time with my cousins. I left Malaysia when I was 18 years old. Half of my beliefs would probably be shaped by spending my formative years in Australia. I’m brought up in a different era. I don’t know how I would have reacted if I was in my grandmother’s shoes where my husband would have brought home another woman and expected me to live with this other woman. I don’t think I would have tolerated that but then I can’t really say if I was born in the era where my grandmother was born whether I would have done anything about it and whether I would have just quietly accepted my fate.

I believe in raising children who are able to think for themselves and who question values that they do not think is right. I believe in equality whether you’re born male or female. I realized the contradictory aspects of my grandfather’s upbringing. I believe that we shouldn’t be too quick to judge someone for the practices and their beliefs because their beliefs and their views are shaped by a lot of experiences and a lot of traditional upbringing so we have to appreciate and accept the differences in all our beliefs and not be too quick to judge.

Bec: Since moving to Australia at the age of 18 to study at University, my mum has achieved so much. She completed her PHD in Sweden, raised my sister and I, for the most part, as a single mum and built a successful professional life for herself as a scientist and lecturer. Nowadays, my mum is an associate professor at the same university she attended as a student over 30 years ago. In her spare time, she enjoys reading, watching Masterchef and spending time in the kitchen preparing her traditional rendang beef curry – another delicious Malaysian specialty.

I hope you enjoyed hearing from my mum, Siew, as much as I enjoyed recording this episode with her. Y si te ha gustado este podcast y quieres apoyarnos, déjanos 5 estrellas y suscribete a Into the Story en Spotify, iTunes o tu plataforma preferida para recibir todos los episodios nuevos. Thank you so much for listening, until next time we hope you have a good time, or at least, a good story to tell.

‘I had a fantastic childhood growing up in Ipoh… I was a tomboy who loved to climb trees and roll around in the dirt and go fishing and ride my bicycle everywhere.’

I had such a good time when I was a child. It was so carefree. We just played like children mucked around like children and spent a lot of quality time with my cousins. 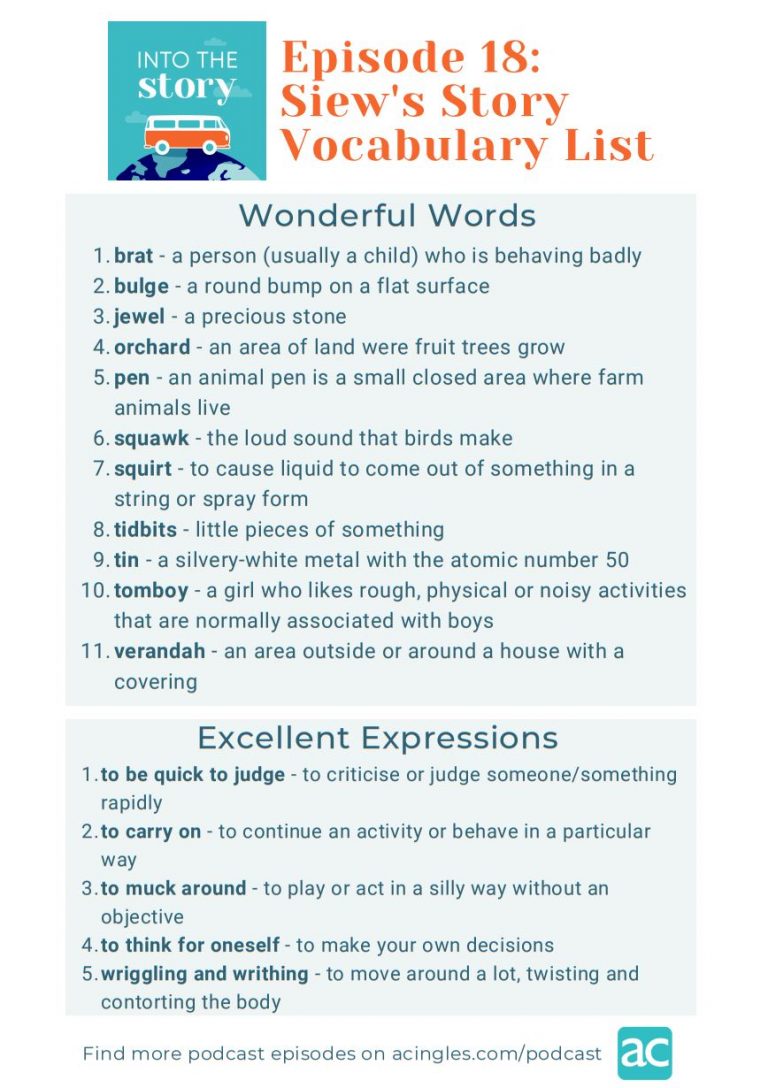 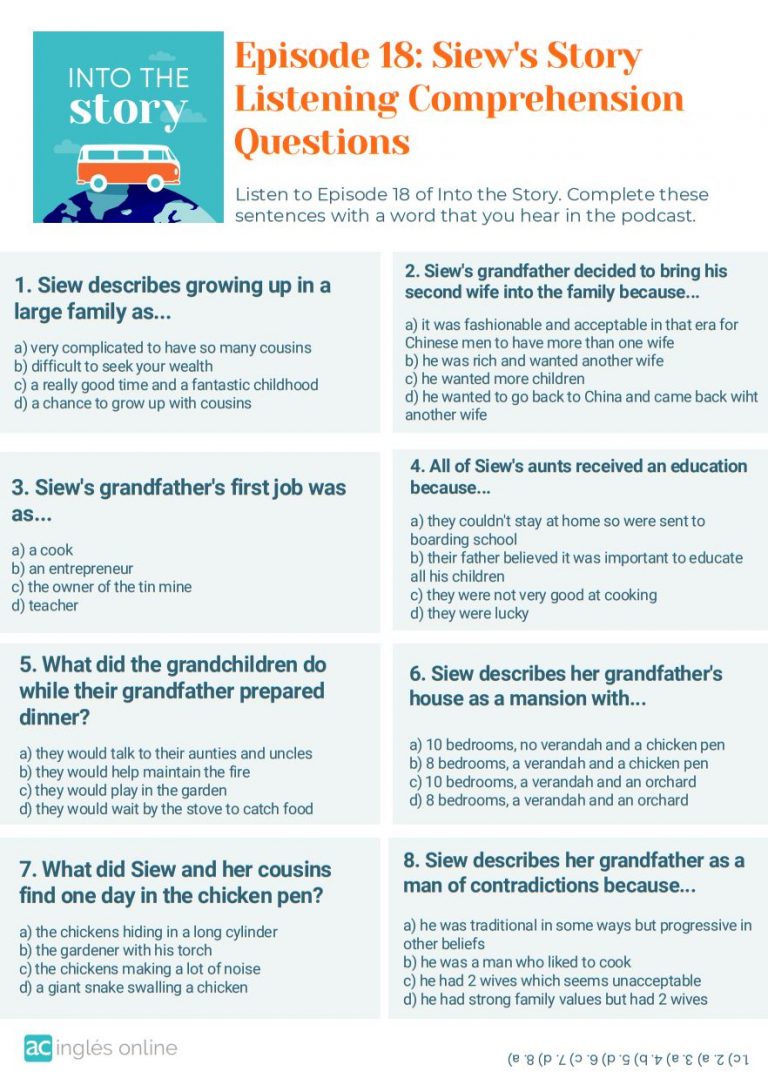 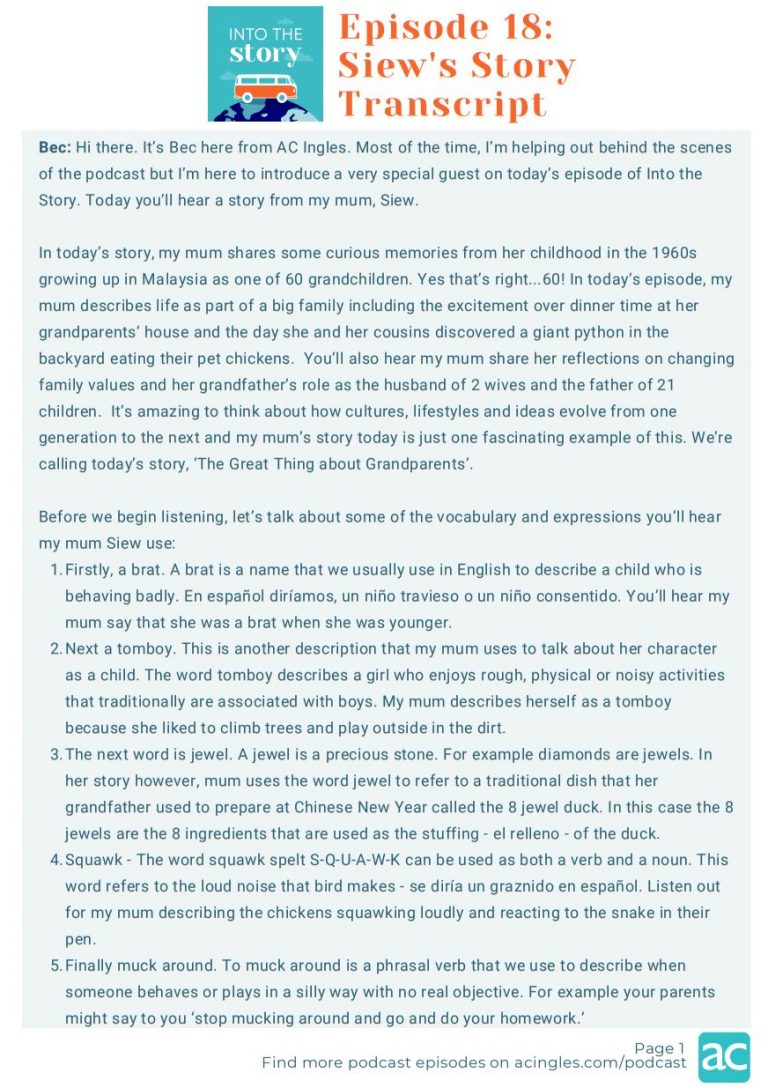