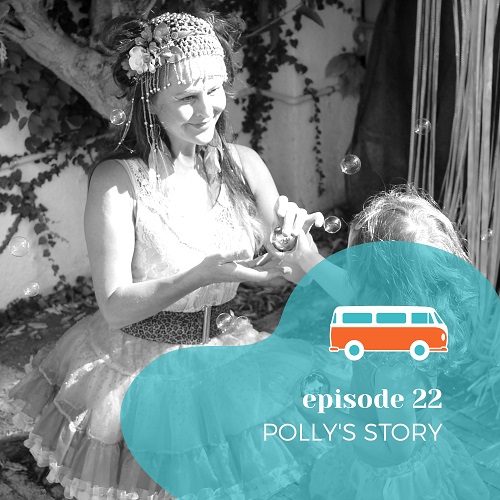 Episode 22: A Story About Making Tutus

Polly: And I think a lot of people when they put a tutu on just they start acting all silly and like dancing and you know it’s just a really fun piece of clothing.

Bree: Polly talks about playing with her mother’s clothes and falling in love with fashion when she was younger. Many years later, she rediscovers her creative side in Barcelona and we’ll hear how she decides to do a pancake tutu making course. But everything is not always easy for Polly, who still has a lot to learn about sewing and balancing her hobby with full-time work. How does she manage to do it all? Let’s listen and find out.

Polly: My name is Polly, Polly Apple and I’m a tutu designer. I grew up in a small village called Great Ayten which is in North Yorkshire which is in the northeast of England. I always loved dressing up from a very young age. I used to dress up in anything I could find. My favorite costume, I think it was my mom’s wedding dress. It was quite a classic, white lace, long sleeved and I actually convinced her to customize it for me. For my, I think it was my 6 or 7th birthday party and then it became part of our dressing up box.

Bree: Polly grew up and moved away from that small idyllic village in England to Barcelona where she started teaching English. She was enjoying this career in teaching, but she found herself being pulled towards the world of fashion, atraída por el mundo de la moda.

Polly: I just seem to attract as friends, performers and singers and musicians and actors and after a while they started asking me to help them to choose clothes for that performance to dress them. Basically because they like what I used to wear when they saw me out at parties. So that is how it started really. It was my 30th birthday coming up.

Bree: When planning her 30th birthday, Polly got inspired by that fancy dress party she had when she was 7 years old. But this time she wasn’t going to wear her mother’s wedding dress, she had something else in mind…

Polly: I had decided that I really really needed to wear a tutu but I couldn’t find a tutu anywhere like a tutu style skirt and I thought I needed to make my own tutu skirt but I had very basic sewing skills and no sewing machine. So I organised a pre party which was to make your own costume to then wear to the main party and we all just felt like we wanted to, to make something that we couldn’t find in the shops. Umm so we were customizing loads. I had no idea about fashion making skills which are required and involved in making clothes so I just kind of threw together some pieces of fabric. What I did was I draped it around myself and then a friend pinned it and that is where I sewed in a zip. It was as simple as that! And of course that doesn’t actually fit very well but it was good enough for me, especially with the tulle which I then put on top which kind of adds volume and hides any mistakes. It basically made me realize that I gained a lot more satisfaction out of actually creating, designing and making clothes rather than just choosing them. It basically inspired me to start training myself up as a seamstress.

Bree: To train to become a seamstress, una costurera, Polly realized that she needed to do some official training. And so, she went back to school.

Polly: I would ride my bike to school at 8 in the morning and then I’d be there studying all morning and learning pattern making skills and sewing skills and then I would either ride my bike or get on a train and teach English from lunch time until 9 o’clock, 10 o’clock at night sometimes and I was doing that 5 days a week pretty much. I wanted to be a costume designer. I wanted to work for the theater and design the costumes for plays. That’s what I dreamed of doing. And my teacher actually asked me to do that. She, my teacher in the course worked in many famous theaters in Barcelona and she actually asked me to be her assistant but unfortunately you know I spent a few weeks oh my gosh it’s really happening this is amazing I’m going to start working in the theatre. Unfortunately that didn’t happen. So yeah that was, that was really tough and it was quite disheartening. I carried on teaching and I carried on doing my, my own projects.

Bree: At this point in the story Polly went home to English to visit her family. Her sister was expecting a baby and Polly wanted to be there to help. However, the baby was taking her time, se estába tomando su tiempo, and Polly was waiting around for her niece to be born!

Polly: My sister said to me all go off and do something fun like you don’t have to hang around here waiting and so I was like okay and I started to look at courses. The course that I found was a pancake tutu creation course so learning how to make a classical ballerinas pancakes tutu which are the ones that really stick out. It was just like, I know that I want to do this course. This is the course that I have been dreaming of doing my whole life and that was an amazing course. The tutu is definitely the item of clothing which just makes me so happy and I think a lot of people when they put a tutu on just they start acting all silly and like dancing and you know it’s just a really fun piece of clothing. Then I reached out on social media and said look, I’ve just done this course and I want to practice.

Bree: As luck would have it, por suerte, a friend of Polly’s knew a girl named Sarah, a 15-year-old ballerina from Scotland who was living in Barcelona.

Polly: And we started working together, designing her dream tutu. It was such an amazing project. It was very difficult. I was still working as an English teacher so I couldn’t dedicate all of my time to the tutu and they needed hours and hours of work. I mean it depends on the tutu but we’re talking a minimum of 40 hours. So I did a lot of research into the character that she was going to be. She was Aurora from Sleeping Beauty and I realized that there are actually quite set kinds of rules as to the colour of the tutu and the decoration and the kind of things like how it should look. I also like with Sarah worked with her dance teacher to make sure that we were meeting the criteria.

Bree: She went to see Sarah performing in Sleeping beauty wearing the tutu that Polly has spent countless hours creating.

Polly: I was very just feeling very very proud of myself and of her as well. It was just, it was just lovely to see her up on stage dancing and something that I had made for her. It was very satisfying, very fulfilling. I had this calling, I could tell, but it was difficult because I was already in another career but I’m so glad that I did it. My next project is actually with a friend he was in a very similar position in terms of design and clothing and creating. We are planning on setting up a shop and a studio so we will actually have a space where I will be able to fully embrace tutu creation and making.

Bree: To this day, Polly still has that very first tutu she made hidden at the back of her wardrobe. She explains that that first tutu was the start of something really special!
Polly lives on the coast near Barcelona with her family where she plans to open her own shop and sewing studio with a friend. Their mission is to encourage a more sustainable attitude towards fashion, by selling vintage clothing and creating tutus using recycled, organic or upcycled fabrics. We can’t wait to see what Polly creates next!

Thank you for being here and listening to this story about making tutus. Si te gusta este podcast, suscribirte. Y si quieres decirnos qué te ha parecido esta historia déjanos un comentario siguiendo el link en la descripción del episodio. Ok that’s all for today. Until next time we hope you have a good time, or at least, a good story to tell.

‘The tutu is definitely the item of clothing which just makes me so happy and I think a lot of people when they put a tutu on just they start acting all silly and like dancing and you know it's just a really fun piece of clothing.’

‘I always loved dressing up from a very young age. I used to dress up in anything I could find. My favorite costume, I think it was my mom’s wedding dress. It was quite a classic, white lace, long sleeved and I actually convinced her to customize it for me.’ 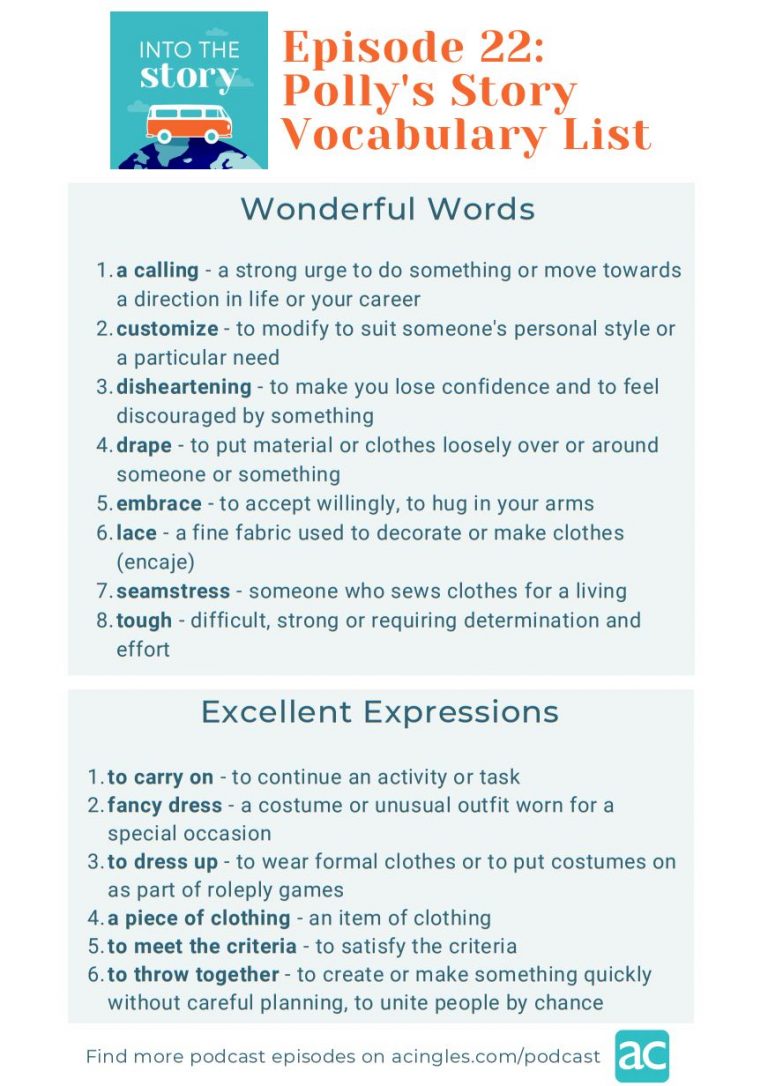 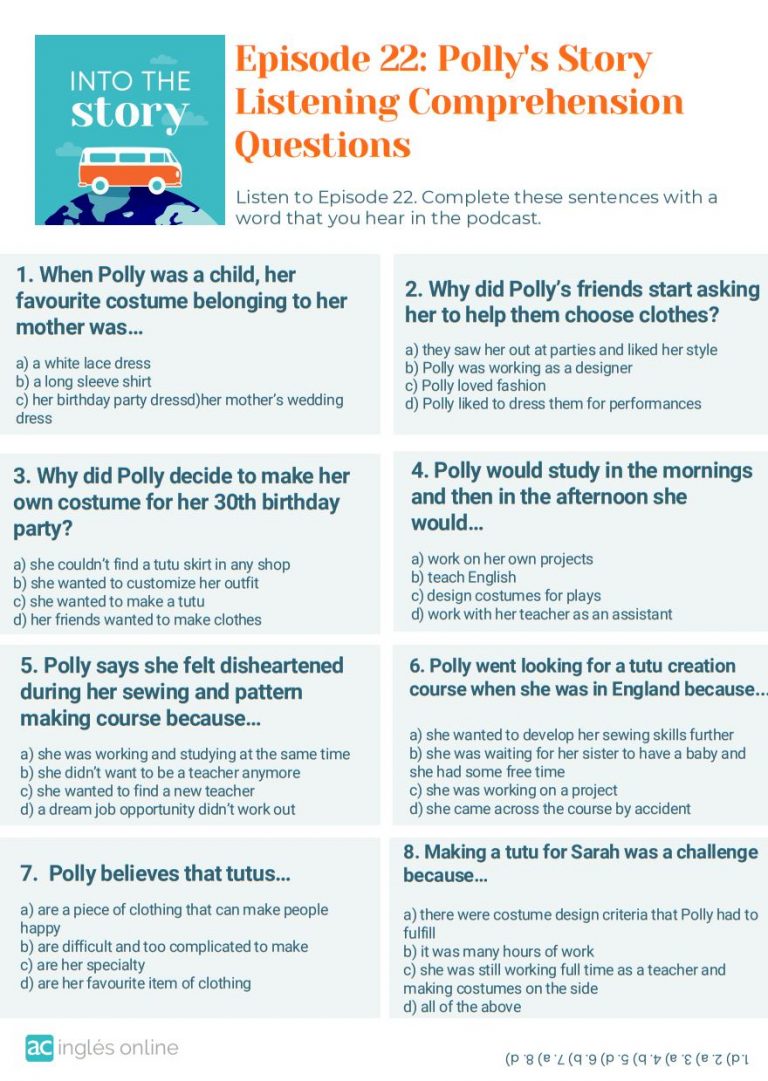 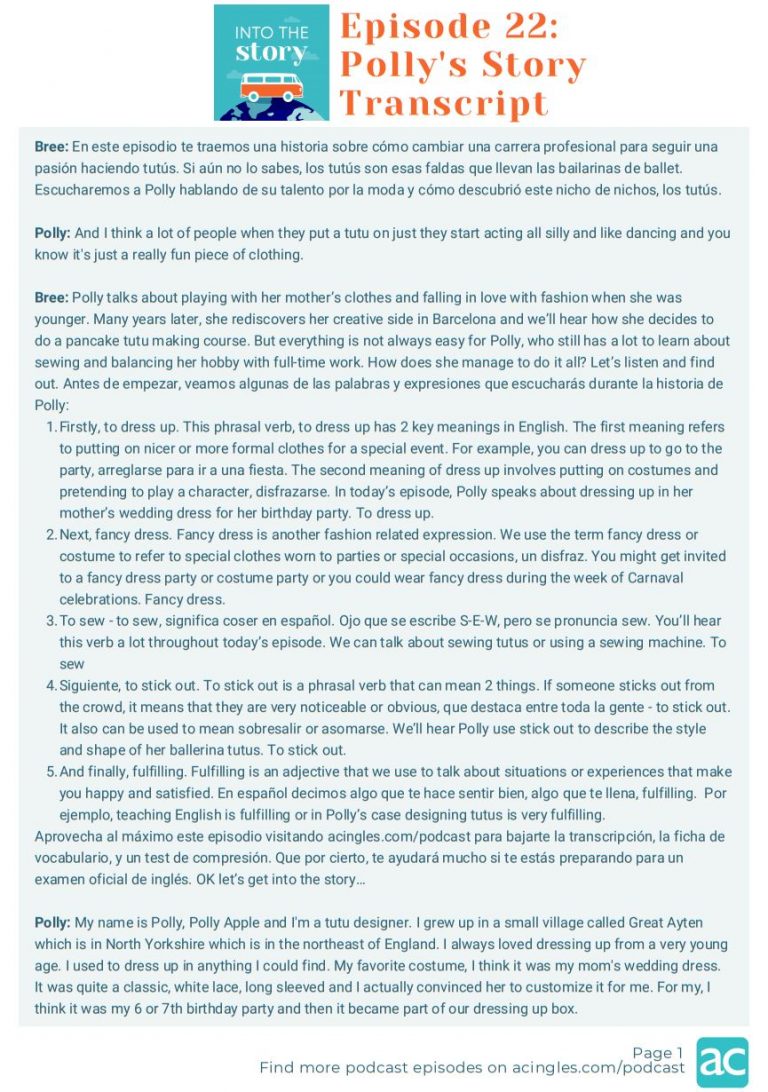