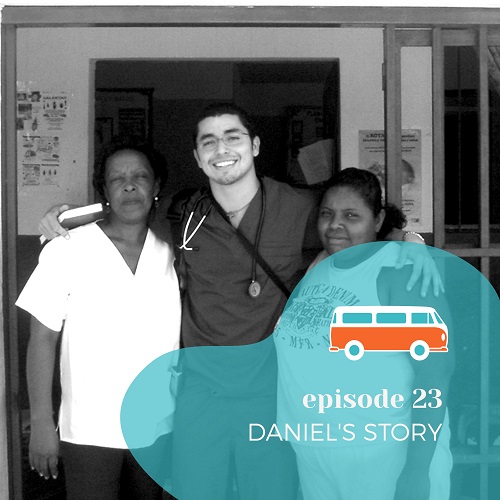 Episode 23: A Story About Saving Lives

Daniel: We were there to take care of the emergency department. We were in our early twenties. Whatever you can imagine a population needs. We were supposed to handle all of it.

Bec: Daniel takes us back to one night in the Emergency Department – the ED as he calls it. It’s busy. There’s a small team of doctors and nurses doing what they can, with the limited resources they have, to help a long line of patients. At this point, a pregnant woman arrives and she’s about to give birth – esta a punto de parir. Daniel needs to do his best to deliver the baby and save his life. Let’s listen to Daniel’s story to hear what happens next.

1.Firstly the plains – the plains, which South Americans refer to as – los llanos – is a big area of tropical grassland in Venezuela. The plains are filled with nature and a lot of farming happens there. In today’s story, you’ll hear Daniel talk about his family coming from the Venezuelan plains.
2.Next, shift – the word shift has a few meanings in English. It can be used as a verb meaning a change – cambiar o desplazar or a noun – un cambio. It can also refer to a period of work. For example we can see that in the hospital Doctors work 3 shifts: morning, afternoon and night – que los médicos tienen 3 turnos en el hospital: la mañana, la tarde y la noche. Shifts.
3.Next to handle. Handle is another English word with many meanings. To handle something could mean to manage something. We often talk about handling a problem or handling a situation. Or to handle can also mean to touch – en español sería agarrar o sujetar. Handle can also be used as a noun to mean a tool to grip something with, like a bike handle or a door handle. Handle
4.Luego viene to be bothered by – This expression, to be bothered by uses the passive tense. We use it when someone or something is annoying or worrying us. For example, I could say that I am bothered by the noise outside or that I am bothered by the news I watch on television. If I bother someone, this means that I annoy someone.
5.And finally to make a call – To make a call has a literal translation which is to llamar a alguien. But in this case, you’ll hear Daniel talking about making a call which means here to make a decision – tomar una decisión. Por ejemplo se puede decir the doctors made the call to move the patient to another room.

Daniel: I’m Daniel. I’m from Venezuela. A beautiful place. It’s pristine. It has a bit of everything. The sea, deserts, mountains and the plains, which is actually where my family’s from. So I’m also a bit of a ‘Latin Cowboy’ you’ll say. I had a horse with a saddle with my name. It was cool for a few photos but I never really got into it. Instead I decided to become a doctor and I think it’s all because at a very young age, I’ve been fascinated by the human body. All the things that it does for you, that you’re not even aware of or didn’t even have to think about is mind-blowing. And that curiosity, that awoke something inside of me and I wanted more.

I got into med school so that was thrilling and ah… once you finish med school if you want to work in the country you have to, by law, work one year in a rural area. Your options actually could be pretty damn cool because you could go to paradise for work. You could go… There are these, like these amazing islands in the Caribbean that that’s true paradise, it’s called Los Roques. So unfortunately I didn’t get that. That was my first option and I got a second option that actually wasn’t too bad actually it was a nice coast in the Miranda state and I finally moved out with a friend. We had this nice duplex near the beach. We had a pool, a tennis court. It was actually very nice. The job… not so great.

Bec: Daniel was in his early twenties when we began working in the Emergency Department of this beautiful area of Venezuela. He was excited to live away from home but he quickly realised that the job was going to be more complicated than he had imagined. Most of his patients were living in poverty meaning they had very little access to necessities like education, medicine and even food.

Daniel: We were there to take care of the emergency department and it was a 24-hour shift and we needed to do one every 5 days for a year and there was supposed to be some sort of a supervisor in the area of some sort of local law enforcement if needed which never happened. We just got our certificate like yesterday we are probably in our early twenties… 23 years old and we are dealing with people with very serious heart conditions or lung conditions and it was a non-stop schedule. It was a continuous flow of patients… of all sorts with all sorts of emergencies. We were taking care of newborns, children, injured, pregnant, whatever. Whatever you could imagine a population needs we were supposed to handle all of it.

On every shift will come a pregnant woman giving birth. So you have to put this into like the situation is… it’s a population which is, like every developing country, the birth rate is quite high. It’s hard because some of these women are quite young so they are teenagers. We had a woman come in. She was due already. We couldn’t tell the weeks, she couldn’t even tell us her date of birth and it’s tough, man. It’s always little resources and you’re doing everything it takes because the need is huge. It’s immense. It’s everywhere and in a rural area it’s worse because their options are way limited.

This pregnant lady, woman, had maybe eight or nine kids already. She had contractions and there was no heartbeat and after a few pushes I’ll say, it didn’t take that long, she gave birth to a non-breathing, no heartbeat, blue baby. I caught the baby and I just gave the mum the sad news. Apparently she had too many kids so she wasn’t really bothered by that and we just wrapped the baby in just whatever we had at the time which I think it would have been newspaper or some old papers somewhere there, put it in a plastic bag probably and just took it to what was supposed to be in the biological waste bin for later disposal.

Bec: As a doctor, Daniel needs to help the person most in need. After this patient had given birth to a stillborn baby he could no longer help her or the baby. So after taking care of the situation as best he could, he moved onto the next patient in the waiting room.

Daniel: I get a call, someone comes to me, to look for me in the ED and was like Doctor, can you come and I found inside the bin, this baby was having a heartbeat! His chest was moving and he was trying to breathe. And that’s when I was like, holy cow! Now it’s a life-and-death situation that it requires like the world to turn to help this baby to make it, you know and we did and we try sorry if we could and we managed to take that baby into the nearest, biggest regional hospital which it was like a 4.5 hour drive which I took with him on a non-medical ambulance because it’s the only one we could find in the area and with the threat of this driver over like… if we take this vehicle you know the whole area will be without an ambulance for at least 12 to 20 hours and you have to make that call and you say yes.

Bec: With that, Daniel jumped into the ambulance, which he described to us more like a van with a siren. It was just him and the baby in the backseat. He carried the basic supplies necessary in case the baby stopped breathing, but it’s a long four and a half hours to the hospital.

Daniel: You’re back there in the baby carrying like this sort of bag with all these IV drugs that you’re going to just stab the baby if suddenly he stops breathing or if he goes into cardiac arrest or whatever. And that’s all you can do. You have no nurse. This is just you and the baby and you get to him the baby over to real doctors! I told you I felt a huge relief. I was really scared for the life of the baby. I was willing to do whatever was necessary. I have deep respect for this human being because it showed me that when life wants to happen, it just does. Our hearts were at ease knowing that we did everything we could and somehow, for some reason it worked! That was, in a way, a very mystical experience because that being just lived because of its own will! It’s a small moment, a tiny reflection and then you realize you still have at least 10 to 9 hours of your shift so you jump back in the car and go back.

Bec: And just like that, Dan drives another 4,5 hours back to work. Since his time working in Venezuela, Daniel has worked around the world in countries like Spain, Switzerland and Australia, which is where we first met! Daniel and I, along with our daughter Zoe, currently live happily in Barcelona, Spain. These days, Daniel’s work as a surgeon focuses more on repairing broken bones, and less on delivering babies.

Thank you for being here and listening to this story … . Si te gusta este podcast, suscribete. Y si quieres decirnos qué te ha parecido esta historia déjanos un comentario siguiendo el link en la descripción del episodio. If you are interested in listening to the story of how Daniel and I met, you can go back to Bec’s Story, the very first episode of Into the Story. Ok that’s all for today. Until next time we hope you have a good time, or at least, a good story to tell.

‘We just got our certificate like yesterday we are probably in our early twenties... 23 years old and we are dealing with people with very serious heart conditions or lung conditions and it was a non-stop schedule.’

Significado de "to make a call"

‘we managed to take that baby into the nearest, biggest regional hospital which it was like a 4.5 hour drive which I took with him on a non-medical ambulance because it’s the only one we could find in the area and with the threat of this driver like… if we take this vehicle you know the whole area will be without an ambulance for at least 12 to 20 hours and you have to make that call and you say yes.’ 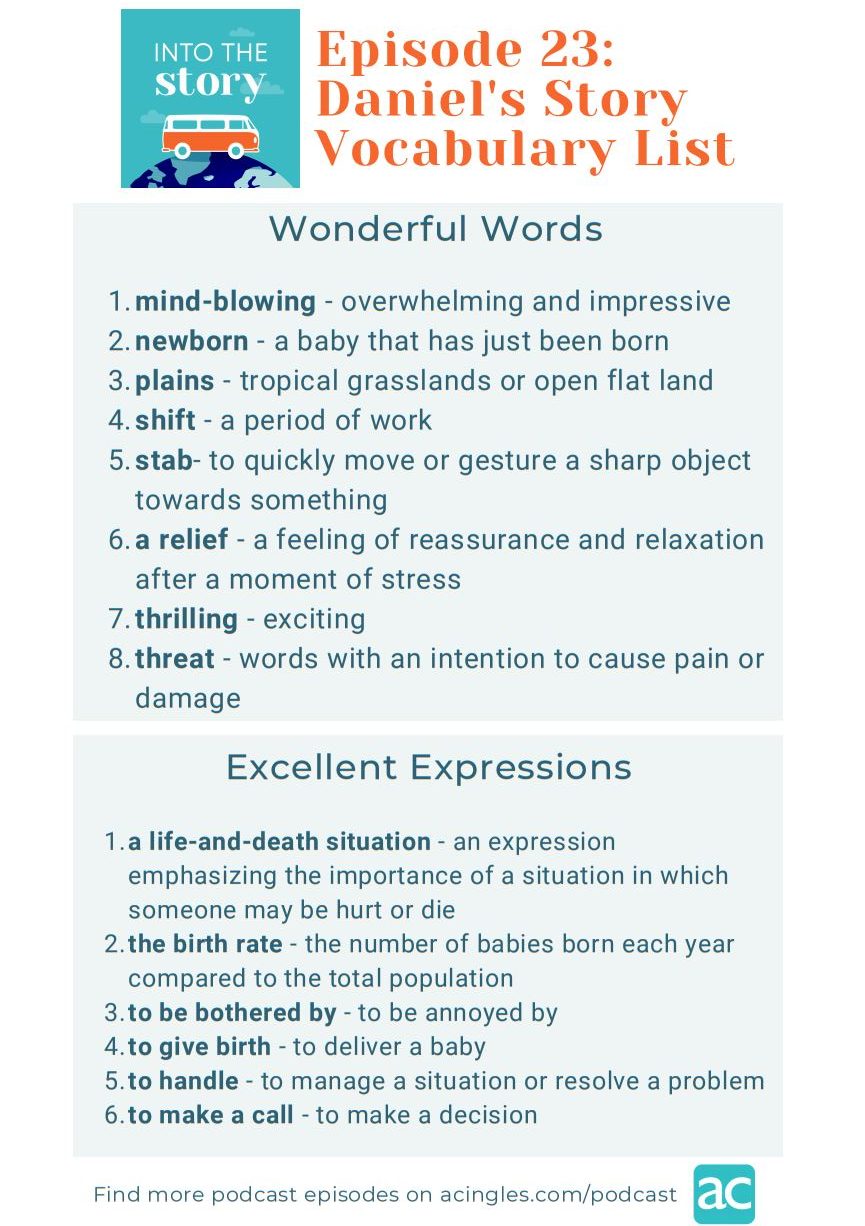 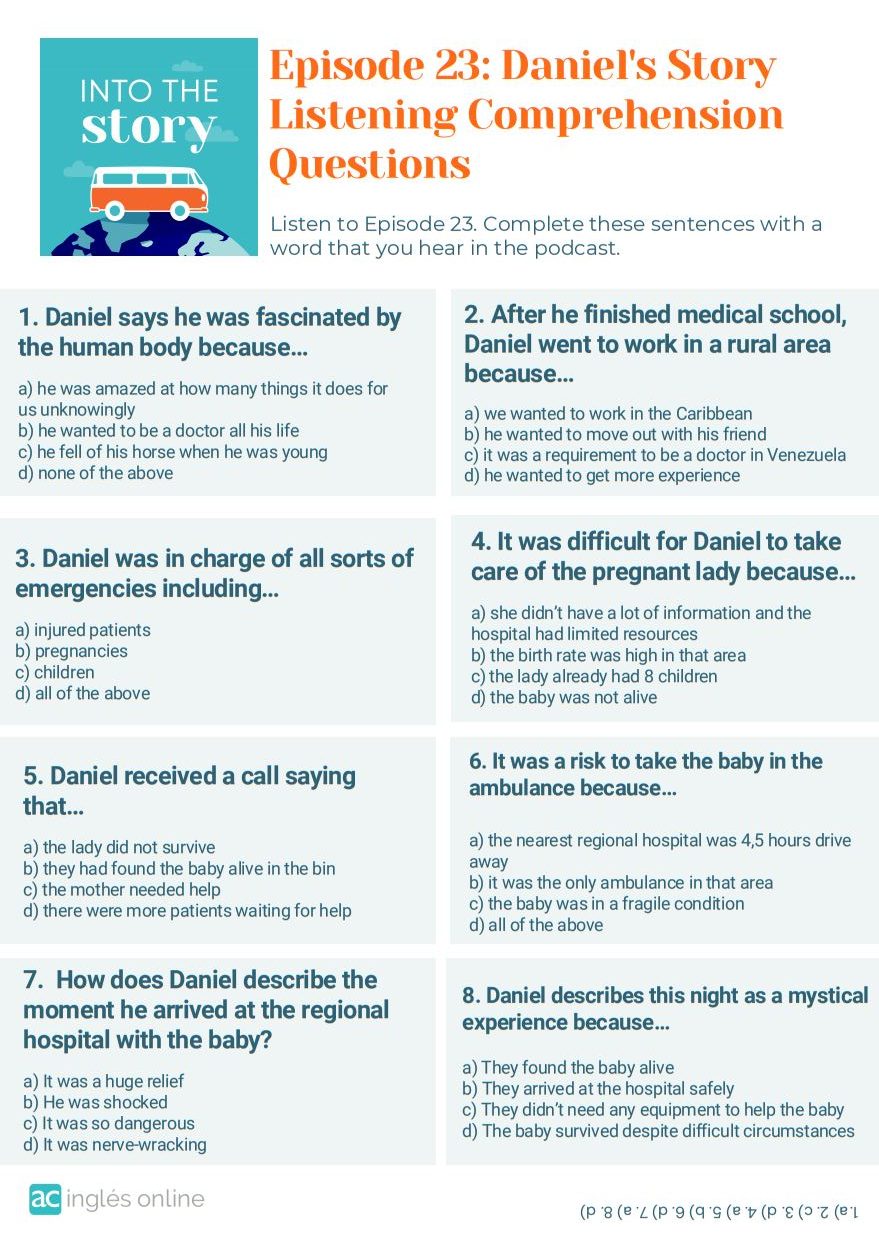 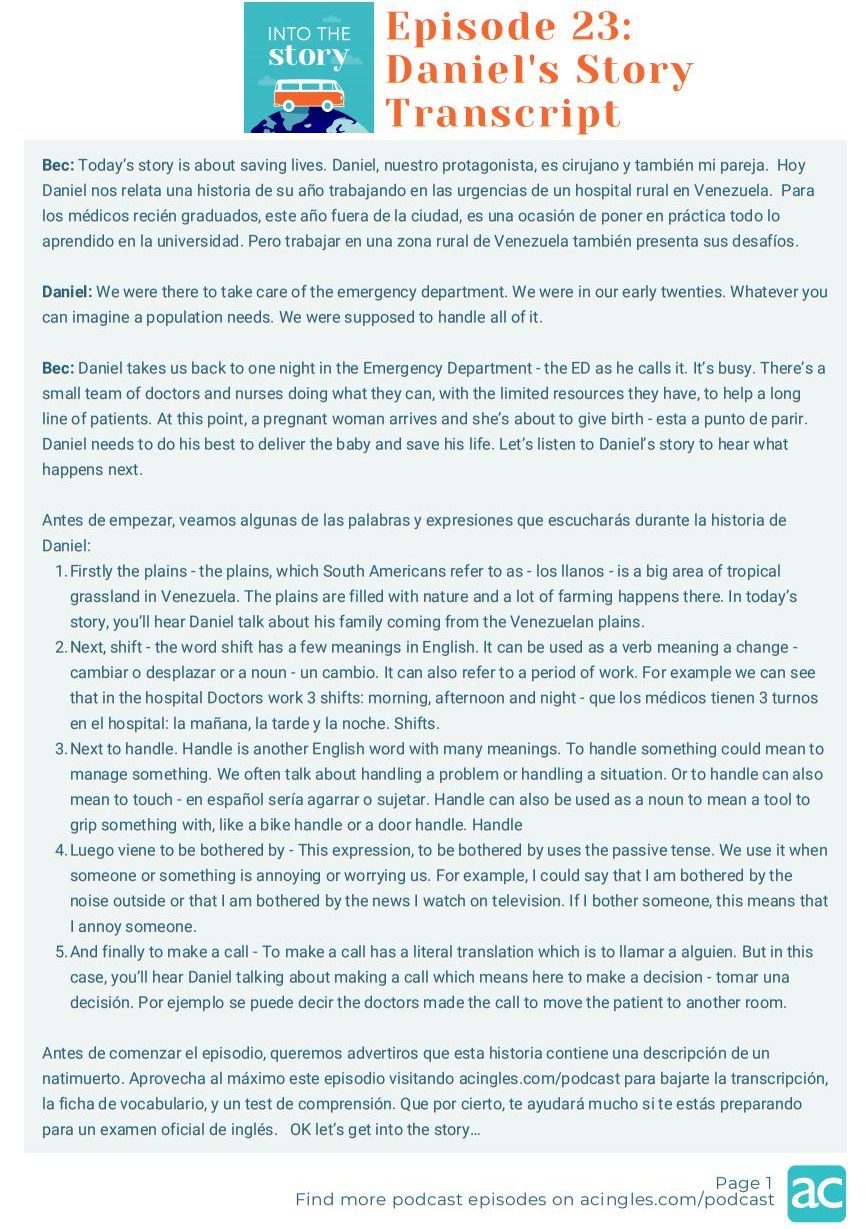 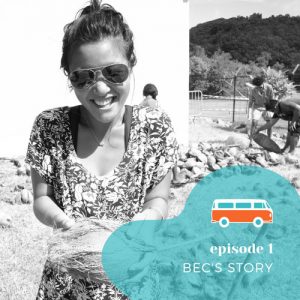