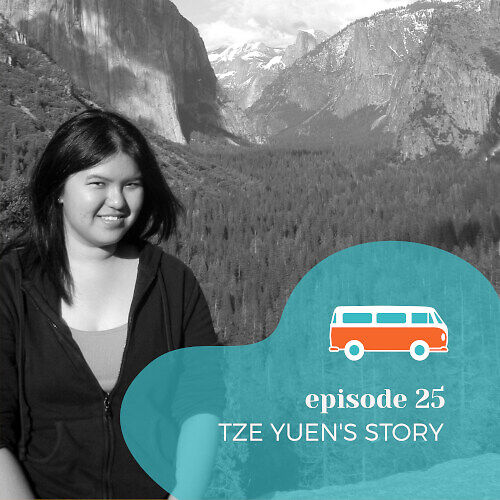 Tze Yuen: We woke up bright and early. We started out on schedule. We left San Francisco at the correct time and we started driving.

Bree: After a long day exploring the beautiful national park, Tze Yuen and her friends find themselves driving along a road, alone at night. They start wondering why there is a car with sirens approaching them from behind. The road trip is not going as they expected. The group of friends need a plan b. Let’s listen to Tze Yuen’s story to find out what happens next!

Tze Yuen: Hi my name is Tze Yuen. You can call me Z. A group of friends and I, we went to the States on a work and travel program. We worked there for about maybe three or four months and then we had about a month to travel. So just imagine right, a group of young girls, I think there were maybe four or five of us. Just barely starting out our twenties and this was a huge trip for the four of us. Our first major trip on our own. To the other side of the world. To a completely different country, a completely different culture. This group of friends and I, we studied locally. So we grew up here, we studied here, we graduated. Everything in Malaysia.

Bree: After studying and working to save up money to travel, the girls rented a car in San Francisco and planned to drive to Las Vegas, stopping in a few national parks.

The day started out great. We woke up bright and early. We started out on schedule. We left San Francisco at the correct time and we started driving. We made it to Yosemite National Park in great time. We parked the car and the first thing we saw when we got out of the car was these huge falls. You know just imagine looking up right and you know from where we were at the car park on ground level. We were looking up, I don’t know, I think we were tilting our heads up almost 90° up to look at the most amazing falls and this was just in the distance. You know, coming from a city of skyscrapers back home in Malaysia, in KL, you don’t get many chances to see clear, clear blue skies. I guess you could say that the colours were almost high definition. And this was the first view that we saw as we came out of the car.

Then we set off on a trail. As you walk along the trail, you can imagine tall tall green trees around you. The smell of green. You know, it’s just this rich smell of damp earth and crisp air and you know we were halfway up the mountain. It was very cool. It was early spring. We got to the first viewpoint. This is one of the most popular viewpoints in Yosemite when you, when you get there, I think you can see the tops of a few mountains all at once. The view was amazing just imagine standing almost at the edge of a cliff. You know when you see the view and you go like wow! Am I worthy enough to see this sort of thing? You feel so small in the grand scheme of things because there are these mountains on one side, the hills on the other side, a valley of forest right below you. Right these tall dark green trees stretching as far as the eye can see. You know where the treetops end was literally where the sky began. So of course, you know, we only had a limited amount of time there. So we continued on our journey. We stopped by a couple of other viewpoints. Stopped by a couple of other popular checkpoints and hey you know what we made our way up the mountain a bit. We came across snow at a couple of points on the mountain so we spent our day. We spent some time there because hey! We don’t get this at home right? We played with some snow, threw some snowballs at each other. We tried to make a snowman not very successfully. But you know we tried right. A for effort! And then, all too soon. Just being surrounded by nature and it’s just the beauty of this national park around you, you know you didn’t want to leave. But all good things must come to an end right? So that is what we did. Made our way back down to the car and started on our planned journey, planned route out of the national park.

Bree: The girls are in a great mood after their day playing in the snow and exploring the forests of Yosemite national park. But then they notice, something doesn’t seem right about the road they are driving along…

Tze Yuen: My friends and I we were driving  out of the driving along the road are my friends music and then one of my friends realized why are we the only car on this road? Then suddenly out of nowhere we saw flashing lights behind us. It is not a very interesting thing to see when you see flashing lights in the middle of the forest when it is dark and there are no other cars around you. Did we accidently leave something behind? Is one of our tail lights broken? What is going on? Why are there flashing lights and a siren behind us in the national park? And we were not American citizens so you know.

So we slowed down. And as we slowed down, there was a park ranger, park booth in front of us. We stopped in front there, just in case. You never know! We were a group of young girls in the middle of the forest, in the middle of the national park alone in a country that is not our own. A ranger, a park ranger came out and the car behind us finally stopped it’s flashing lights and  out of that car came a couple of other park rangers. What a relief! Very safe bet that we won’t be kidnapped and murdered and our bodies thrown into the national park.

So it turns out, it apparently had been snowing the past couple of nights so this road was closed. And so there we were four girls in a car, in the middle of the forest, in the dark, lost, not knowing what to do now.

Bree: The park rangers lead the girls to a highway out of the park. But now they’re 6 hours away from the hotel they’ve booked for the night. In a sudden feeling of excitement being young and far from home, they decide to go along with this adventure. They’re just going to drive and see where the road takes them. But after a while, that sense of adventure turns into exhaustion.

Tze Yuen: It had been a long day of getting lost and getting rerouted many many times. So we decided, hey you know what, let’s just call it a night. We turned off the highway at the next exit and we came into this small quiet town. You know it was dark, it was at night, it was after dinner and we headed straight to the nearest open diner that we could find. We dragged ourselves into the diner. And just imagine that you are the waitress in a quiet town and you are maybe closing down for the night and this group of young girls with haggard expressions just dragging their feet into your restaurant. So she must have seen that exhaustion on our faces and immediately took us to a booth. So we had our dinner. Of course we had our dinner. Eating very quietly without talking. Just focusing on our food and you know we didn’t have much brain power to do anything anymore. It was the end of the day.

We asked the waitress about accommodation and she pointed us to the local motel. Went in. Prayed and prayed that there were vacancies there. Wow you guys are really lucky because we are almost full we only have one or two rooms left. That was exactly what we needed. Literally we went into the room, sat on the bed, didn’t even argue whose turn it was to go and shower first. We just washed up, crashed immediately and didn’t even have our nightly  gossip session.

When I woke up you know, I realized that I didn’t even know the town that we were in. To my very very pleasant surprise it was actually a very nice room. I went out to, went out to the car to get a few things. As I walked out I could see that we were in this very quaint motel. I can still remember watching the world waking up around me, hearing the world waking up around me. The owners of the motel started to putter around. Starting to say good morning to their guests behind me. Starting to hear the nearby restaurant starting up their fires. You know everything waking up. All the detours, the worries and stress and the exhaustion of the night before made it all of that worth it to be there at that moment.

Bree: After this unexpected detour, Tze Yuen and her friends arrived safely in Las Vegas. Since her time working and travelling in the United States, Tze Yuen returned home to Kuala Lumpur, Malaysia where she lives and works in digital content marketing and communications. In her spare time, Tze Yuen enjoys doing sudokus, reading good books and relaxing on the sofa watching her favourite series.

Thank you for being here and listening to this story about a road trip detour. Si te gusta nuestro podcast y quieres apoyarnos, déjanos 5 estrellas en iTunes y asi tambien ayudaras a otras personas como tu a mejorar su ingles gratis.  Ok that’s all for today. Until next time we hope you have a good time, or at least, a good story to tell.

'Did we accidently leave something behind? Is one of our tail lights broken? What is going on? Why are there flashing lights and a siren behind us in the national park?'

‘Literally we went into the room, sat on the bed, didn’t even argue whose turn it was to go and shower first. We just washed up, crashed immediately and didn’t even have our nightly  gossip session.’ 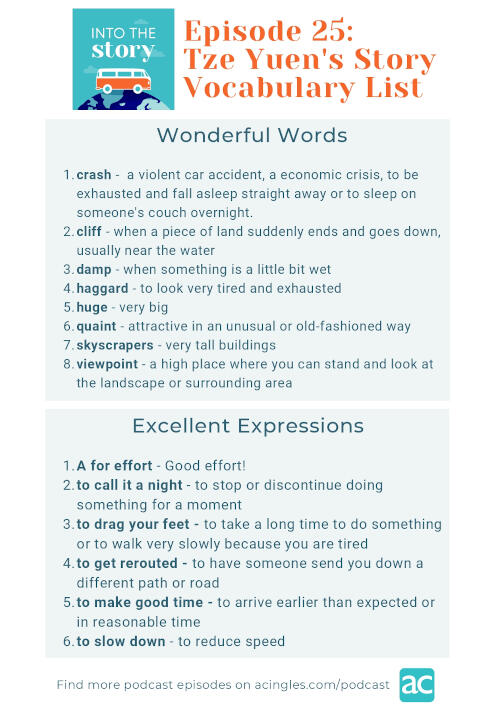 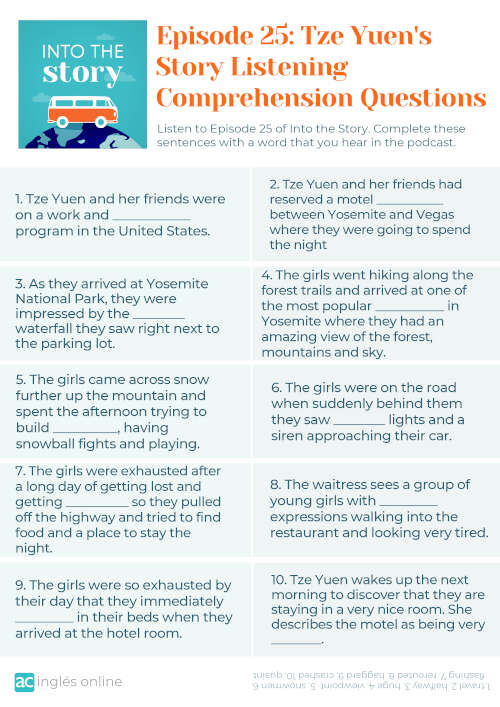 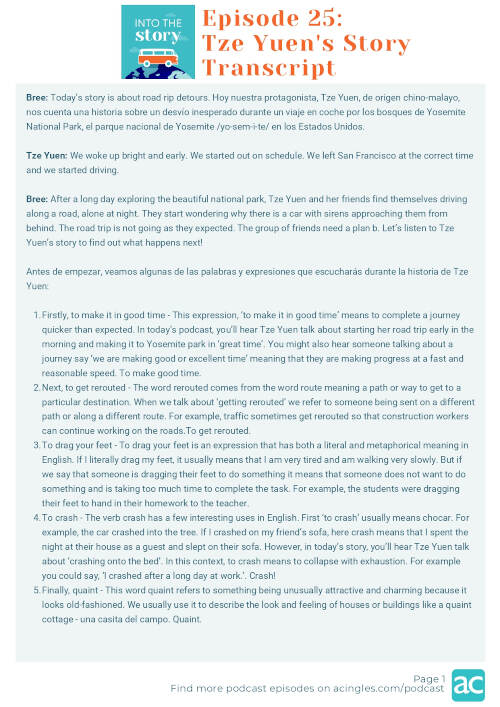