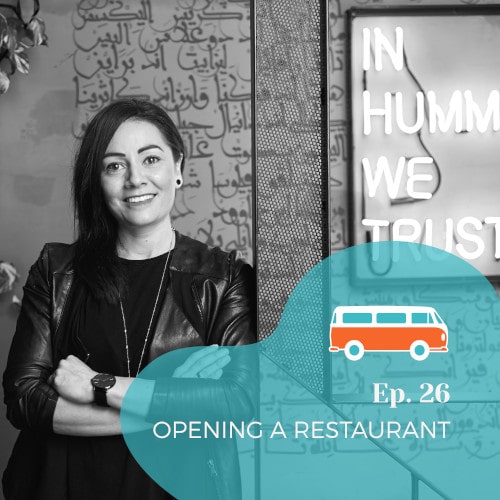 Ep. 26: A Story About Opening a Restaurant

Kaitlin: …food is how you come together and show each other how you love each other… So it was definitely part of my calling and it was something I had to do in my life.

Bree: Finally, the idea for a restaurant comes to mind while Kailtin and her business partner, Ziad, are travelling around Spain visiting tapas bars. They are inspired to bring Middle Eastern culture and food to Australia in a new and interesting way! From there, they begin creating recipes and testing their food on friends and family. Let’s listen to Kaitlin’s story now to find out how they created the Hummus Club and brought their restaurant to life!

Kaitlin: My name is Kaitlin Eterovich and I live in Perth, Western Australia. So my mom’s Croatian and also my dad was born in Croatia. And food, I guess it’s that Eastern European culture which is like you feed everyone and food is how you come together and show each other how you love each other and my family are great cooks. My nan is a great cook and also my mom is a fantastic cook and I’ve always been interested in food. When I was younger, I wanted to be a chef and then I also just wanted to own a restaurant in general. So it was definitely part of my calling and it was something I had to do in my life.

Bree: Food had clearly always been a big part of Kaitlin’s life and culture growing up. Now it was just about waiting for an idea and finding an opportunity to make her dream of owning a restaurant come true!

Kaitlin: My business partner and I, we were travelling around Spain at the time, yeah, and we actually were on a bus tour and we were dropping into all the little tapas places in different cities of Spain and yeah it was one day when we got back on the bus and I was like… You know why are there not more mezza places in Perth? Mezza in the Middle East is shared plates. No one will have their own particular dish, it will, all the dishes will just be in the middle of the table and everyone will share it. Everyone will pass it around and share it. So we wanted to bring that idea to Perth.

My business partner is of Middle Eastern origin and so he was born in Lebanon. And I remember like, a lot of the times that we would eat his family’s cooking etcetera and yeah it would be really amazing and I was always a big foodie and I was always thinking, more people need to try this food. We wanted to really change perceptions of what people thought the Middle East was and also change perceptions of what people thought Middle Eastern food was as well. So yeah getting the idea from tapas bars in Spain where there are lots of little dishes and food so we then went back. We started to taste testing recipes etcetera. We chose hummus because it’s a really universal dish and a lot of people know as well but you know, it was also that coming together medium so we always wanted people to really feel comfortable and you know accepted excetera. And you know, a plate of hummus…doesn’t matter your race, gender and religion you just come together and you just enjoy that time and that space with each other.

And we launched a market stall soon after. We just wanted to start small. It was intense like cos we were working full-time jobs as well. So I’m a pharmacist and my business partner is an engineer. So we were working full-time jobs and then doing this on the side and on the weekends. It was a side hustle basically. There was a lot of work though involved in getting everything to the market stall, getting registrations, setting it all up, getting the marquis, getting all the van unpacked etcetera. So yeah… We woke up at 3 a.m. like really stressed out wondering if we had enough stuff like we were double-checking everything.

Bree: Kaitlin and Ziad work like crazy to make the market a success. Ziad is frying fresh falafel and Kaitlin is serving hungry customers. Even though that first day was a success, they discovered that setting up and serving food at a market is difficult and there are a lot of things that can go wrong . . .

Kaitlin: You know our fridges would go off or the hummus would go off, or like the fryer would literally blow up in our faces like it was very dangerous taking out a fryer out of a van to a market stall etcetera. And you know then like having to drain the oil and then windy conditions could like blow away your marquis away. Yeh so the market stalls were really popular.  We were blown away by all the support like we became really popular. We became one of the most popular market stalls in Perth! We started off with one market stall per week and then we were doing about three to four a week and we just kept on growing and growing and growing and then it just became so popular that I was spending… because I was all the admin, the back end, doing social media. It was a particular day and I just thought to myself,  I am being a really bad employee right now because I’m spending all my time, I’m literally doing scripts and stuff but then once I’ve done that I’m like organizing the market stalls and working out registrations, like all the back end stuff. And I was like, you’ve got to make a decision now and that was when I was like ok I gotta go full-time into the market stalls now. It was a big decision to leave something that I had been studying for like 5 or 6 years. But I knew I had to take a risk. It was an intuitive thought within me. It was both a relief but also like wow what am I doing!? I think all these things are going through your head when you make big decisions in life but you know, 30 minutes later I was ecstatic really because I was like wow, I’m going along a new path.

Then we actually got offered a little pop up space in Trinity Arcade and it wasn’t something that we thought that we were going to do, we just wanted to go straight into sort of like the big restaurant space. But we thought like no, no, no. We need to make a logical step, so then we did that. We went into the pop up space but in doing that, then my business partner also had to quit his job as well.

Bree: Kaitlin and Ziad spent 9 months in the pop up restaurant. Then they realized that it was time to go bigger. They found a restaurant space on William’s Street, Northbridge, a lively suburb of Perth known for its food and nightlife but a lot of work still needed to be done to transform the building into The Hummus Club.

Kaitlin: The potential was huge when we walked into that space. But in the same breath, I would say it was also just like a derelict building, so we really have to put some imagination into what it could be but it was a really cool building on Williams street. There was going to be a deck made and it would be the only place on William Street that had that sort of view and street side dining.  So the potential was huge but it was a massive job because we had never fitted out or designed a kitchen let alone a restaurant before. And it was an old Residential Building so there was a lot to do and a lot of people were like, so you are going to what open a hummus restaurant in Northridge? People would laugh at our idea but we knew what we wanted to do. We knew what our mission was.

Bree: The business partners were inspired by modern Middle Eastern street art and underground Arabic music when designing the restaurant. They wanted to serve real Middle Eastern food and share Middle Eastern culture with Australians in a cool and modern way. After months of hard work and renovations, testing out the menu, and setting up all the procedures to run a restaurant, they were finally ready to open.

Kaitlin: And then the opening day was also stressful because you just want everyone to like it and know that you are doing a good job now you’ve done it for something because we had quit our jobs to do this, to follow this through and open it up! You have to just push that aside and just get, this is what it is now. We didn’t know if people would come, we didn’t advertise it that much because we just wanted it to be sort of an organic opening but we did also have a lot of support from our social media following and followers so that was really good.

Bree: After that opening night, the Hummus Club has continued to grow! People love the restaurant concept and the modern Middle Eastern shared plates that Kaitlin, Ziad and their team had to offer.

Kaitlin: We’ve been there for four and a half years now and it’s still just as busy as ever. We are always changing menus and we have got a new team. We have released our spice ranges during covid so now we have some spices as well that people can pick up and take home and use in their own cooking. I definitely feel like we’ve achieved success in wanting what we came out to achieve! I know that we have changed the Perth food scene and brought something very different to Perth.

Bree: Kaitlin continues to work with the team at the Hummus Club serving up Middle Eastern food to their loyal hummus-loving customers in Perth. Outside of work, Kaitlin enjoys spending time with family, her dog Zeus and other foodie friends as they try out other restaurants in Perth’s ever-growing restaurant scene.

Thank you for being here and listening to this story about a side hustle turning into opening a restaurant. Si te gusta nuestro podcast y quieres apoyarnos, déjanos 5 estrellas en iTunes y así también ayudarás a otras personas como tú a mejorar su inglés gratis. Ok that ‘s all for today. Until next time we hope you have a good time, or at least, a good story to tell.

'When I was younger, I wanted to be a chef and then I always just wanted to own a restaurant in general. So it was definitely part of my calling and it was something I had to do in my life.'

This quiz is no longer available.

‘So I’m a pharmacist and my business partner is an engineer. So we were working full-time jobs and then doing this (the Hummus Club market stalls) on the side and on the weekends. It was a side hustle basically.’ 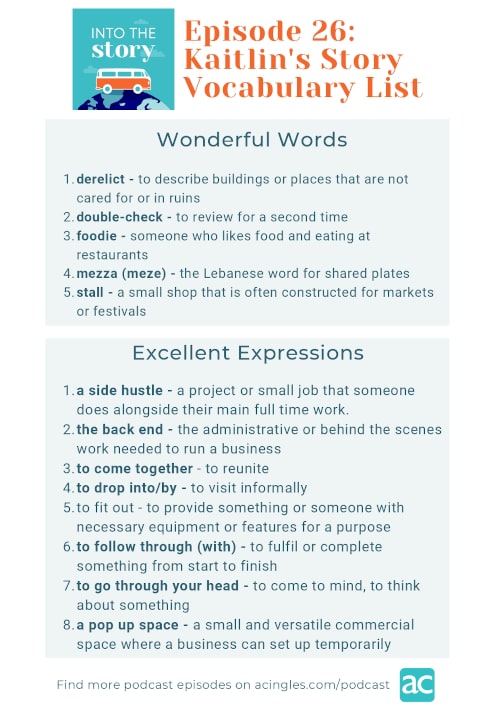 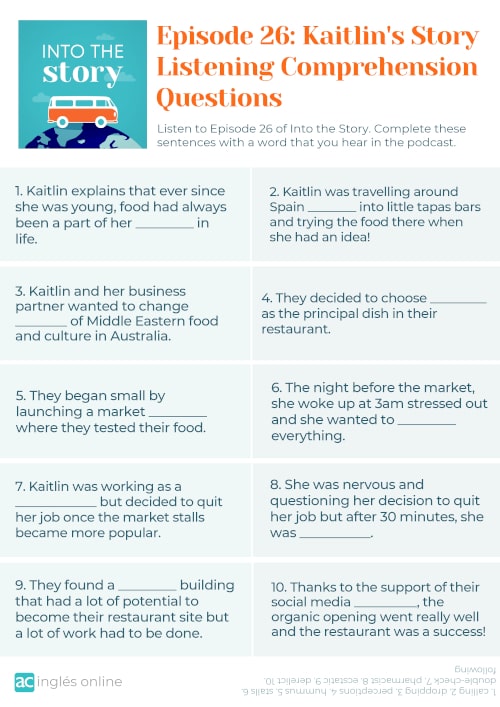 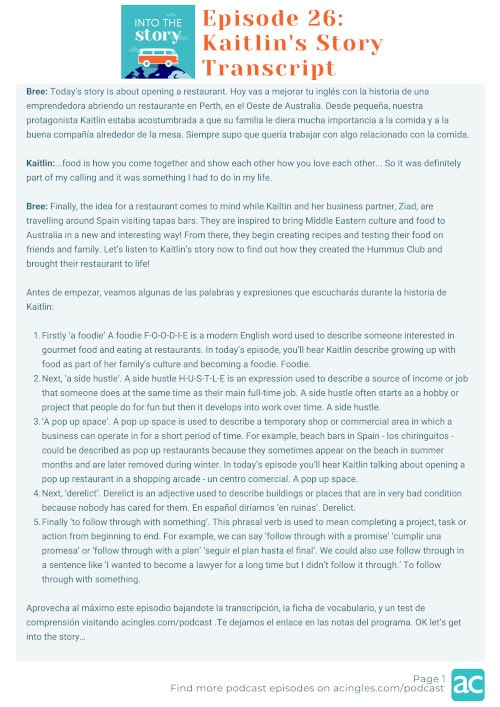