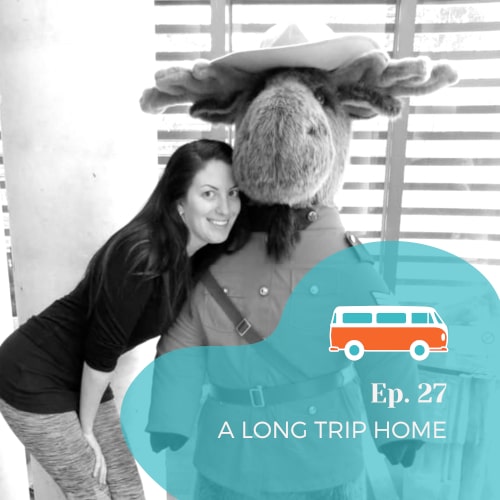 Keena: We are both crying. We are waving… when she pulls out of her fanny pack my wallet and I’m just like… oh no!

Bree: Keena had an amazing time in Greece with her best friends. She says goodbye and starts the journey home. As the boat leaves the port of the island, she realises that she left her wallet with her cousin on the island! It’s too late now to go back and get it. A lot of thoughts come to Keena’s mind: How will she get to the airport with no money? How will she survive 3 days with only her backpack? Let’s listen now to see what Keena does next!

Keena: I’m Keena Violini and I am from Calgary, Alberta which is in Canada but I currently live in a small mountain town in BC, I currently live in a small mountain town in BC called Revelstoke. So in 2010 I went to Greece with two of my best friends, Sam and Bree. It was a wonderful trip. We spent the first week in Ios and then Sam left and it was just Bree and I and we, Bree is also my cousin and we had a little bonding time. We went to Santorini for a few days and then we went to Folegandros for the remaining time of our trip. So Folegandros is a very small and local island and it only has two ferries coming in and out and there was not a lot of young people there but it was beautiful.

Bree: Keena had booked a super discount flight home from Greece. It had 3 long layovers – escalas – and 3 different countries and was going to take her about 50 hours. But first, she had to get to Athens to catch her flight.

Keena: Nearing the end of our trip it was getting very hard, Bree was going to stay in Europe. She had just graduated and I was going to go back to Canada. The ferry comes. I get on. I´m on the second level of the ferry. I run to say goodbye. Bree is at the front on the beach. We are both crying. We are waving. The ferry pulls away and it’s about 30 feet from the shore when she pulls out of her fanny pack my wallet and I’m just like… oh no!

It didn’t even register right away because I was like well, I have my passport. My passport is in my backpack and that is all I needed to board my flight but my wallet had everything else, my money, everything else for 3 days of travel. So in my backpack, all I had at this point was my passport, clothes… I had some cream cheese because we had found a little convenience store shop that had cream cheese and I love cream cheese. And I had a bag of some nuts. This is supposed to be my snack for the bus and the ferry ride. This was 10 years ago. I don’t have a phone because I didn’t even bother to bring it to Europe. You didn’t just get a sim cards for them so we were communicating even on my way there which was few and far between when you found it at an airport for free.

Bree: Keena settled in for the long, lonely ferry ride back to Athens. . .

Keena: So I got off the ferry probably at about 7am. And my main thought on the ferry was how I was going to get on the bus to the airport and I was basically deliberating between asking a stranger to just drive me and then my second thought was I will just ask the bus driver if he could just help me out this one time. In my passport folder there were some random Euros but not enough, by any means to get on a bus. I waited for everyone to get in and I just got on with my backpack and I just opened my eyes as big and as wide as I can. There was a huge language barrier. I have no background in the Greek language. In English we have an expression, that when…like you cannot comprehend it or it’s basically not English to you. We say ‘it’s all Greek to me’. But in this case, it actually was. What if he said no? Or if he just kicked me off the bus. I mean it was possible. He sees this small little girl with a backpack that is probably the same size as her. He thought about it for maybe a few seconds and kinda gave me a nod, like a… go to the back, alright, take a seat. I was like ok, what is going to be the next obstacle?

So I get to the airport and I have about 6 or 7 hours before my flight and at this point I’m getting a bit hungry so I dive into my stash of nuts and cream cheese and then it becomes time to go through security. And I had seen a sign that says crossing international borders, no meats, dairy, nuts and seeds. And at this point I was like well this is all I have for the next few days so I think I’m just going to bring it. So I go to put it in my backpack but then I started worrying. Oh I don’t want to be interrogated. Coming home from Australia a few years back I had not declared some of my items so I was taken into the back room and interrogated and given a warning. A second time coming home from the Cayman Islands, a similar situation had happened.

So at this point I’m just about to go through security and I decide I’ll just get rid of the nuts. So I turn around and sneak them into the garbage can beside me. Someone had seen me do that. So as I am just about to put my things on the belts, a guy comes over to me and asks me what I had put in the garbage and I explained just some nuts but he didn’t believe me and I was like you can look they are just nuts and seeds, I didn’t know. Anyways he takes me back, back into the room there where they interrogate you. They asked if I had any other food in my backpack. At this point I thought about lying but I was already you know in a situation that probably wasn’t very smart. I told them and they made me throw that out and so now I had nothing but they let me go through security and on I went to Munich.

Bree: Keena’s flight from Athens to Munich goes smoothly. She is now on a transatlantic flight to the States. Until now, she has just been offered peanuts and water on her flights. On this flight, however, she would receive lunch. It had been about 24 hours at this point since she’d eaten a proper meal.

Keena: I am a very very picky eater. My meal was meat which I didn’t eat at the time and rice which is one of my least favourite foods ever. So I picked at it for a bit but I hadn’t hit starvation mode yet. So unfortunately I didn’t take advantage of that meal. So I get to the States. The States is always challenging. They are so intense there and you have to explain lots of things and they just make you nervous. And at this point I’m so exhausted and I’m getting pretty hungry now. And really kinda wish I ate that rice and you don’t realise that you can’t do anything without money. You just look around and everyone has all these things around you like a coffee or a snack or a granola bar and you are just like ‘I want that!’ ‘I just want a bite!’.

Bree: After a long and uncomfortable layover in the States she finally boards her next flight.

Keena: And then it was to Toronto and I had another layover in Toronto and now I’m hitting severe hunger. The flight from Toronto to Calgary is about four hours. So I get on this flight. I’m in the middle seat. The woman on my right, she had ordered off their paid menu. She had ordered a sandwich on focaccia bread. It looked like the most incredible thing you have ever seen. At this point I think I was drooling. And she saw me. I had asked her if I could have a bite and she turned to me like a little bit stunned. I blurted out my whole story. And she was so sweet. She had ordered me a sandwich and it was the best sandwich I have ever had.

I land in Calgary. I was just relieved to be home. In all of my travels, I seem to find myself in a lot of chaotic situations. It becomes more of like a game, an adventure. And it gives me a bit of an adrenaline rush that I think I love. How am I going to do this? How am I going to survive 60 hours of travelling without a wallet? Well, let’s see what happens!

Bree: Keena continues to travel and find herself in chaotic adventurous situations. These days you’ll find her snowboarding and hiking in the mountains around Revelstoke, British Columbia, Canada and of course spending time with her friends.

Ok that’s all for today’s episode. Until next time we hope you have a good time, or at least, a good story to tell.

‘In all of my travels, I seem to find myself in a lot of chaotic situations. It becomes more like a game, an adventure. And it gives me a bit of an adrenaline rush. How am I going to do this? How am I going to survive 60 hours of travelling without a wallet? Well, let’s see what happens!’

´I am a very very picky eater. My meal was meat, which I didn’t eat at the time, and rice, which is one of my least favourite foods ever. So I picked at it for a bit but I hadn’t hit starvation mode yet. So unfortunately I didn’t take advantage of that meal.´ 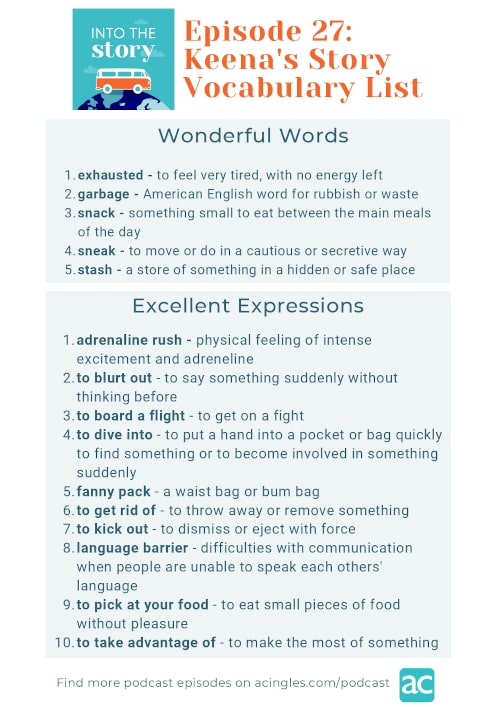 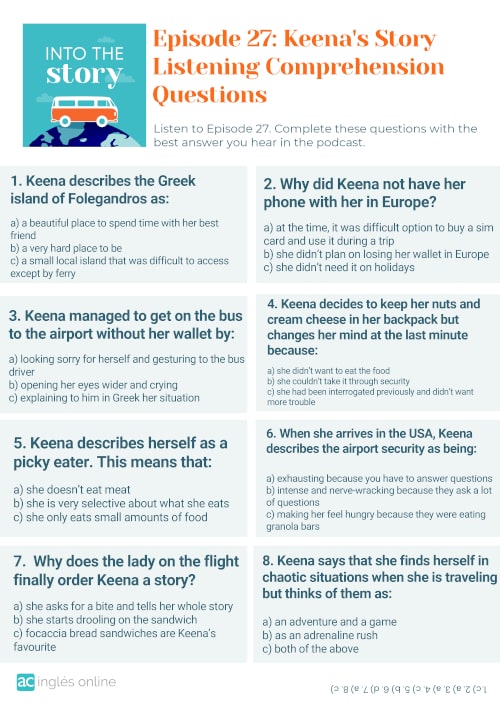 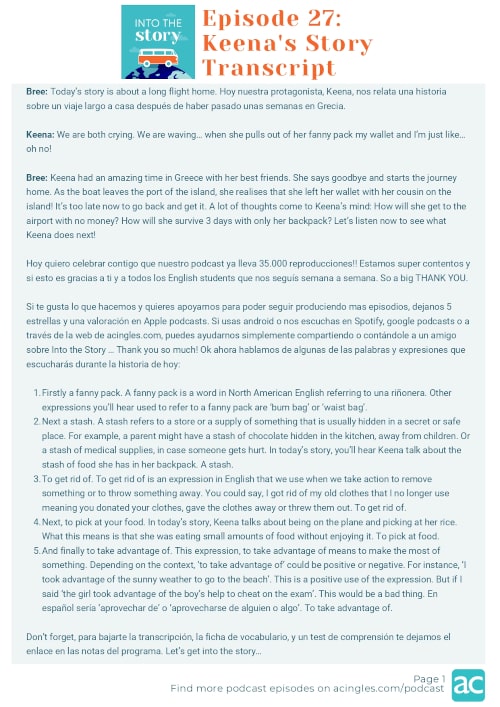