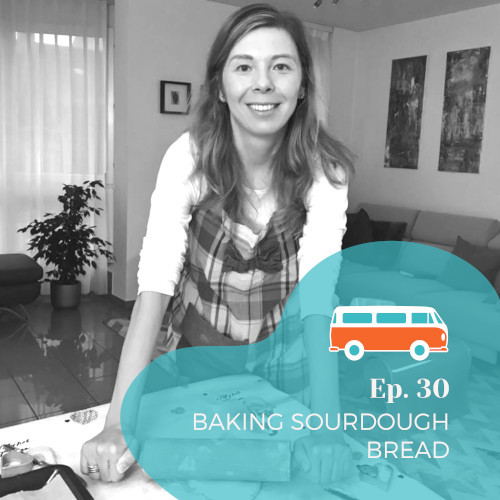 Erika: And on Fridays we would always make bread in her wood burning oven. And I think this is how my love of baking started. I think it’s expressing myself through something that tastes good!

Bree: Erika now lives in Switzerland, where she rediscovered her love for preparing cakes and bread last year during lockdown. Erika was searching for a hobby that could help her pass the time indoors. Then one day her partner introduced her to sourdough bread. Erika was curious about the science of sourdough bread baking and so she decided to start her own bread making project. She soon discovered how much she enjoyed being a part of the growing sourdough baking community! ¡Sigue escuchando para escuchar a Erika describir por qué el pan de masa madre es tan especial y por qué en Suiza se ha abierto un hotel de masa madre!

Hi listeners – I wanted to celebrate with you that we’ve reached 50,000 listens! And today is our 30th episode and the last episode of Season 2.  We’re already busy preparing the next season so stay tuned to your podcast feed! Mientras tanto, nos vas a ayudar un montón suscribiendote y  dejándonos 5 estrellas. Thank you so much for your support!

Erika: So my name is Erika and I live in Basel, Switzerland. However, I am from Ljubljana, Slovenia. Slovenia is a bread eating country. We have different sorts of bread, different grain, flour combinations. And I used to bake a lot with my grandmother even before I went to preschool. I would stay with my grandmother during the day when my parents were working and on Fridays we would always make bread in her wood-burning oven. And I think this is how my love for baking started. My grandmother would always give me pieces of dough for me to shape and those would then be my little breads. She would teach me how to stretch the bread, how to knead the bread so those are my very vivid memories that I always kept and it developed from there.

When I first moved to Switzerland, I didn’t have a full-time job. I was taking a lot of German classes and then I was also baking cakes for orders. And I did that, however it’s kind of a lonely job to do.

Erika: At the very beginning of the lockdown in March last year, I noticed on Instagram particularly and in different newspapers all the articles about sourdough. People posting pictures of these breads that the crust looked incredible and because sourdough takes a lot of time to make, there were also online courses popping up, ‘how to start your own sourdough starter’.

Sourdough starter is a combination of flour and water that you keep out at room temperature for 12 to 14 days to allow the bacteria to grow and then this is then used  instead of yeast in cultivating the dough itself, the bread dough. And then my partner Lucas took a course. It was a few day long course and he started his first sourdough starter and his first attempt was not that successful but he did not give in and he tried again and got successful and started baking bread.

Bree: Seeing how successful Lucas was got Erika interested in trying to make sourdough bread herself. Working from home because of the lockdown, as we will hear, allowed her to dedicate the time necessary to the long process of making this bread.

Erika: So then I got really interested and I was like huh maybe I should do this on my own. So I took part of his sourdough starter and I cultivated and fed it myself. I took the recipe from the course he did and I watched many YouTube videos (on) how do you fold, how do you stretch. So during meetings I would be able to stand up, fold and stretch my bread and leave it for another half hour and be on the next meeting and then continue like that.

And what’s the difference between the breads I baked before, they were never completely covered and this one was in this pot, this dutch oven, that I couldn’t look in because I love looking into the oven while something is baking. I was wondering: Is it going to rise well? Is it going to be crunchy and beautiful? And for the first time, it was really quite surprising how well it turned out and I think it was from the first time on that I was hooked.

Bree: And so began Erika’s sourdough bread making adventures. She started experimenting with recipes. She tried adding nuts and seeds and even tested out different flours to see how they changed the texture and taste of the bread. Erika soon discovered she wasn’t the only person excited about sourdough bread, there was a whole community of bakers out there!

Erika: I got really involved with the sourdough community. I was seeing it everywhere. There are many sourdough bakers on Instagram. I was really following the communities online seeing what people were baking. Then I saw in a Swiss newspaper, for example, that a Sourdough Hotel opened in Zurich. I was really surprised and I wanted to find out what this hotel could be. And then I saw that when you go on holidays and you can’t leave your sourdough starter at home because no one would feed it. You can take it to the Sourdough Hotel with your preferred blend of flours for you on the regular basis as you would feed it at home. Why? I think everyone might be asking themselves. Why do you want to keep your sourdough alive right? The longer you have it, the stronger the bacteria in the sourdough starter is. It produces better sourdough, sourdough products right. So they’re on the internet you can even buy fifty-year-old starters.

Bree: There seemed to be a sourdough craze, una moda, happening in most parts of Europe and the US, and Erika was loving it. Kneading, stretching, and baking sourdough during meetings and trying different flours. She quickly became the ‘bread lady’ to her friends.

Erika: My friend started calling me the bread lady because also during the quarantine there were so many restaurants closed and for a few gatherings with friends when we organized brunches, my friends asked me to bake the sourdough bread and I don’t just do the ones that kind of are standard. I mix and match different flowers. I add seeds. I add sun-dried tomatoes. I made baguettes. Focaccia. Actually one of my close friends asked me for her birthday gift, (if) I could give her coupons for the different bread types. Different sourdoughs  that she could cash in during the year. I definitely find a lot of gratification baking bread. I like the whole process. I think it’s expressing myself through something that tastes good because giving bread or giving cakes. It’s all the same for me. It’s making my friends and people around me happy.

Bree: We hope that listening to this podcast about delicious bread made you feel hungry! Nowadays, Erika is still in Switzerland, experimenting with new and wonderful sourdough bread recipes.

As you can imagine, she was so excited to share her detailed knowledge of sourdough bread baking with us so we’ve prepared a little bonus section here for any learners interested in learning why this bread is so special.

Erika: What’s different about sourdough in comparison with yeast bread is that it is also baked in a dutch oven which is a metal pot that is heated up to a very high temperature and the bread is then tipped into it and covered with the lid so that it protects its moisture and that the crust gets very crunch and it’s baked for about 40 minutes at 230 degrees. And it produces a very crunchy crust and sourdough is actually easier to digest and for people who have different intolerances, they digest sourdough much better than bread with yeast. And sourdough stays fresh for a really long time. It stays really fresh for about 5 days which is definitely a plus and I think that’s why it is so popular. And its crunchiness. There is nothing better than cutting this freshly baked crunchy crust.

'I definitely find a lot of gratification baking bread. I like the whole process. I think it’s expressing myself through something that tastes good, because giving bread, or giving cakes... It's all the same for me: It's making my friends and people around me happy.'

Puede que hayas oído a alguien en inglés hablar de “getting hooked on a new TV series” o de “be hooked on strawberry ice cream“.  Cuando usamos el modismo “to get hooked” or “to be hooked” (on something or someone) en inglés, la usamos de diversas maneras. 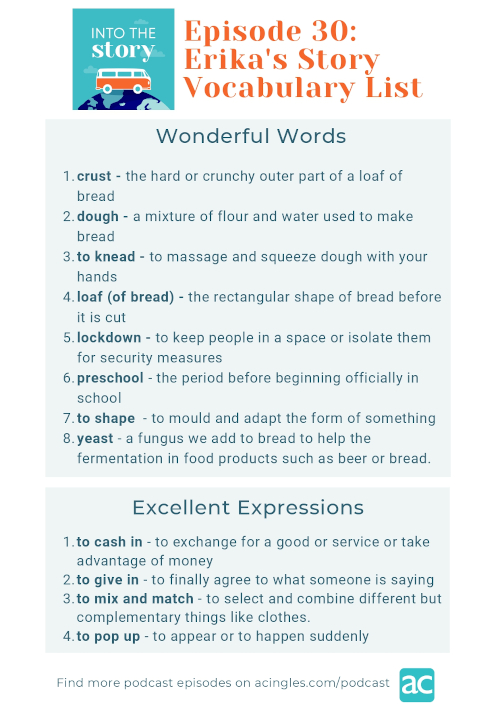 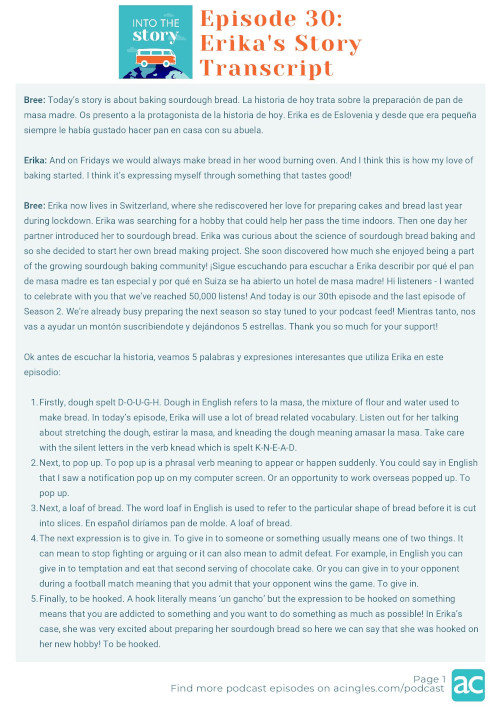 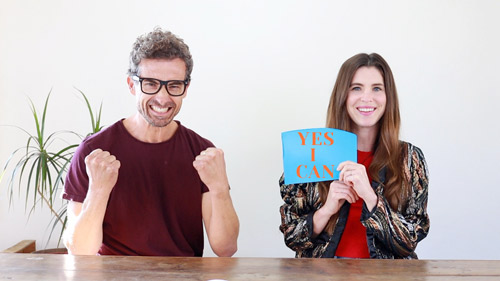