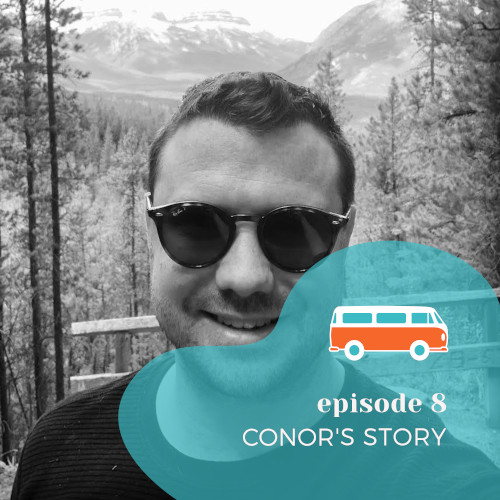 Episode 8: Conor's story: backpacks, bars and being who you want to be

Bree: The year some people take to travel after high school before starting university or work is often a very transformative experience. And for our storyteller today, Conor, who had been  trying to live a life that he felt society expected of him, a year traveling allowed him find his true self and come out as a gay person.

This week, we hear Conor’s story about how a year living in Australia allowed him to truly open up, embrace his identity and fall in love for the first time. We’ll hear about that moment he arrived in downtown Sydney without a real plan and the moment he met his boyfriend’s mum for the first time only minutes after she’d attacked a snake in the back garden. We’re calling this story ‘Backpacks, Bars and Being who you want to be’.

Before we begin listening, let’s talk about some of the vocabulary and expressions you’ll hear Conor say:

If you need more help with understanding Conor’s story, remember for each episode, you can get a full vocabulary list and listening comprehension activities on our website acingles.com, that’s la letra a, letra c, ingles punto com. OK let’s get into the story…

Conor: We lived in a town outside of Calgary but closer to the Rocky Mountains. So it was sort of expected, that if you were male that you would, you know, be on the football team and that gave you a lot of likes status and popularity, and that kind of thing, and I just never really, even though I attempted, I never really fit into that mould. That I… I thought that there wasn’t really a place for me there. So it was a time of confusion and then probably triggered depression and anxiety that I’ve kind of lived with since. Well but I think it really started earlier on like in elementary school with the… with kind of living with this secret of being gay and sort of avoiding it and trying to push it down or not face them so there was kind of this secret that I was always living with, which was very toxic.

I saved up enough money, I think it was $1,500 for a round-trip airline ticket to Sydney and to my parents’ dismay… I… I was going! Landing in Sydney I took the the metro into like, central Sydney and literally checked into the first hostel that I that I saw. So yeah, I remember going up to the room. I think it was on like the 10th floor and opening the door and there was like everyone was sitting on their bed, like it was bunk-beds, and I kind of found my bed and put my backpack down there and then of course didn’t really know what to do next.

My original plan was to actually go up the east coast of Australia but I kind of knew and that was the official story is that I told my parents but I knew that I wanted to stay in a big city where there was progressive community, like I was looking for a my people kind of. So I kind of settled in. At the hostel, it was getting pretty expensive so I had to find something a bit cheaper so I I was told about share houses. A Scottish traveler has said, ‘oh I’m going to move into this share house and you should check it out! It’s across… it was in Piermont, which is across darling Harbour, and it was quite a big house. It was like a mansion, like an old mansion, but I would be living with 30 to 40 other travelers and it was like maybe a 10-room home but it has like bunk-beds in the room. So yeah they just kind of crammed everybody in there and it was an experience. Like it had a pool in the back but it was freezing cold water and then we would play these crazy games at night like it was a lot of drinking and debauchery and that kind of thing. Just a bunch of backpackers from all over the world. I think there were British and like English, Scottish, Welsh, French, Spanish, Canadians, Americans, South Americans. Everyone around the globe kind of. So it was… it was so interesting because I learned so much from, from those people about, you know, why they were traveling where they’re from what they’re like way of life is like why they chose Australia. So I learned a ton from living there and then meeting those people.

After a month I had had enough. It was time to to look for something more permanent. I ended up going to this bar Stonewall Hotel. It’s a very well-known gay bar in Sydney and so then the first night, the first night I was there, I met this girl who was sort of like glaring at me,  giving me the stink-eye from the other side of the bar and we ended up kind of sitting and talking. After the first time I met Jess, she invited me to coffee and we went for coffee and she said, ‘hey like I know you’re here living here and I share, shared accommodation and that you said that it was pretty hard so why don’t you come in and stay with me you can sleep on my couch’. I was thrilled and delighted that she offered and then that really started a like a lifelong friendship. She was giving me kind of the support and guidance that I needed to talk about life kind of every single day after work and what she was going through and I was going through we had similar kind of childhoods in a lot of ways. They were different in a lot of ways but um sort of the struggles at school and not fitting in. I would help her and give her advice on like her just because she was also gay. We would meet at the Newtown Hotel every day after work for a few pints… and that was a gay bar and so we know, we were always, she taught me the ropes of how to be… how to live in a gay world.

Me and her had gone out one night to Stonewall and I met Matt. So I’d seen Matt out quite a bit and I really I had a huge crush on him and he was sort of like the life of the party and he seemed to be very popular among groups. But he was also just very nice. He would come and always introduce himself and say hi and I think one night, I just went up to him and said I really like you like I want like… I want to ask you out on a date or I like asked him out on a date. He said yes and so I think the weekend after we we went out for pizza and that kind of started my first relationship and my first time I fell in love.

We had only been dating a couple months and he wanted to bring me back to his hometown to meet his mom. The day that I got there, his mom had killed a snake with a shovel and she’s like, ‘I right killed it like come out and I’ll show you’! It was really nice to meet his family they were very funny and sweet and they, you know, would cook us you know big meals and it was just like this fairytale kind of romance that we had. He was very similar to me but also very different.

So we were together for about six months until I had to… I decided that I was going to go back to Canada. My parents were putting a bit of pressure to come home and finish University. So I decided that I was going to go back and Matt wasn’t too happy about that… and he… it just ended up just kind of fizzling out because, I mean, there wasn’t really…. he couldn’t come to Canada so there wasn’t really a future for us. So we ended up, kind of, it ended badly but we’re still friends now like still talk now once in awhile but at the time it was… it was sad because, you know, he was my first love and yeah we lived together at the time and spent all of our time together. So it definitely was hard but I had to come home.

I was really worried and scared of coming home because I had lived this lifestyle of being out as a gay person for a year. You know where I… I change the way that I dressed and how I styled my hair and the way that I talked and everything had kind of changed and it reflected more of who I was as a person. Like my outside personality was now more in line with my, with my inner self or my true self. I built up enough courage to let my my parents know. I think I told my brother Brendan first that because… he was sort of the one that I was most worried about… but he was so accepting.

That year really added to my character and to my story in trying to figure out who I am and where, you know, where I fit in. Being open-minded and accepting of who I am and who others are and being grateful for the people and the things that I have in my life.

"That year really added to my character and to my story… Being open-minded and accepting of who I am and who others are and being grateful for the people and things that I have in my life." 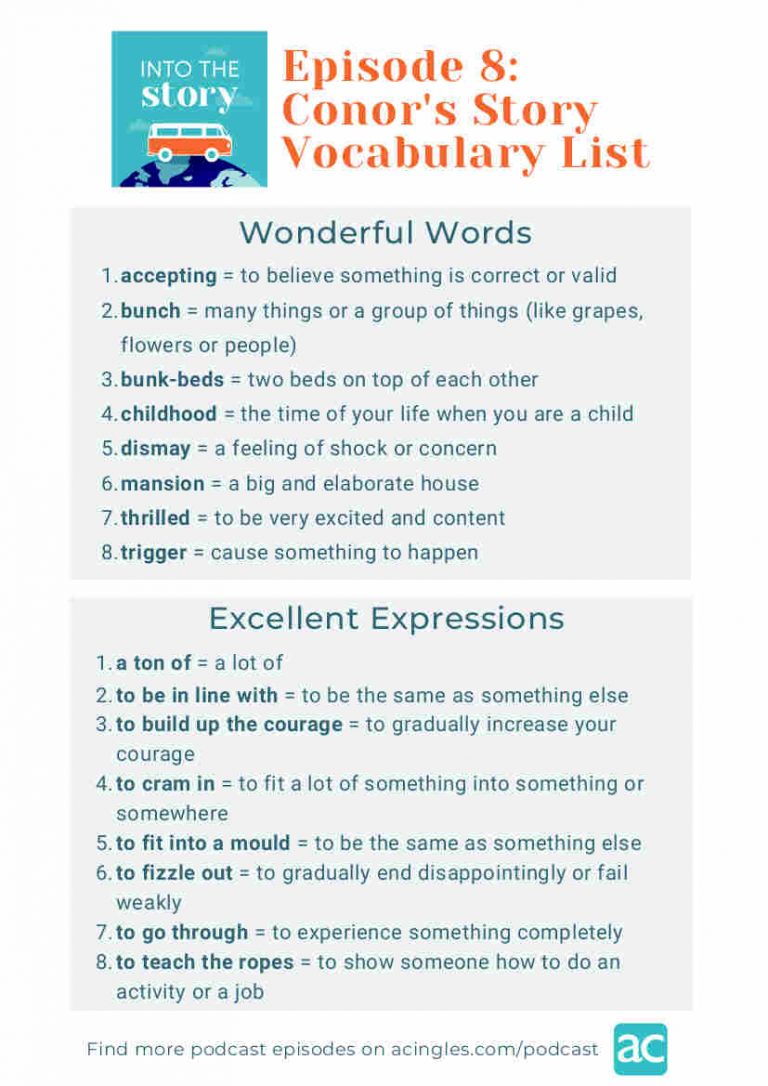 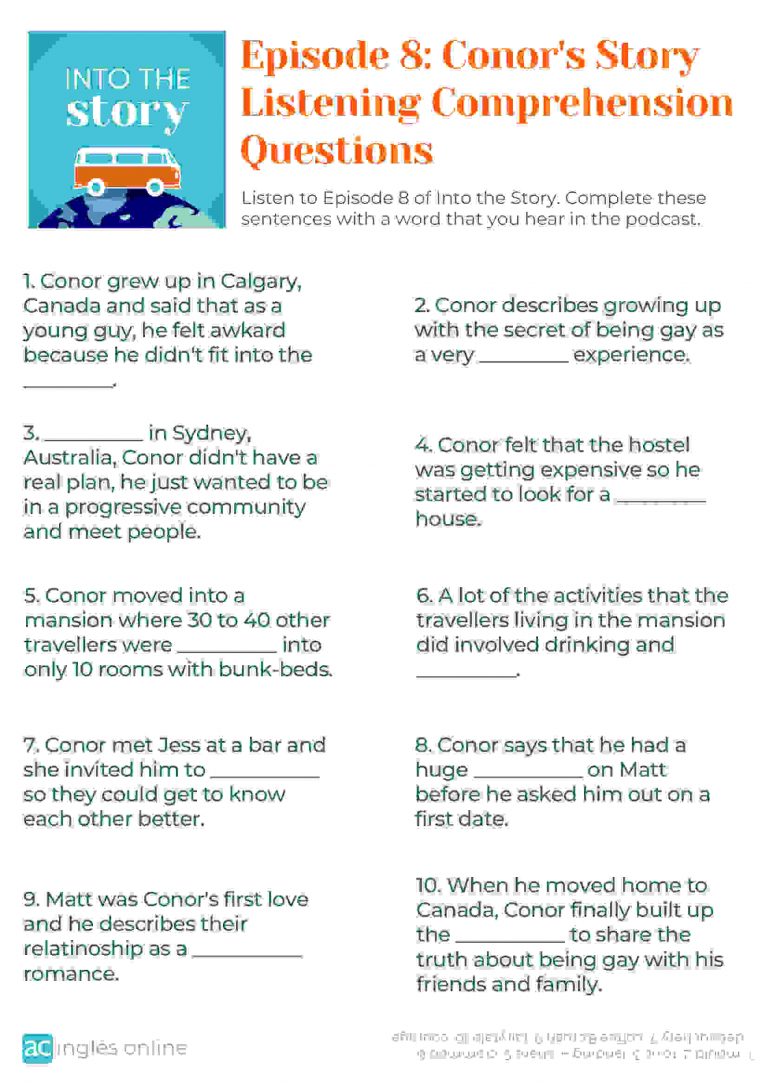 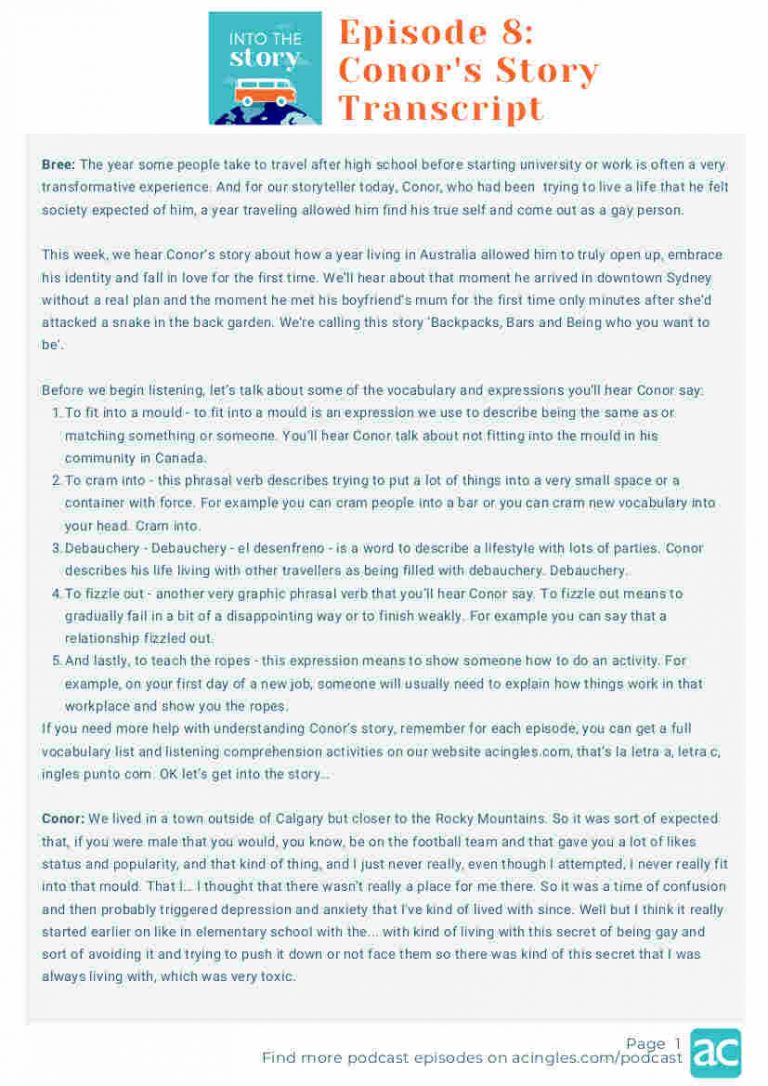