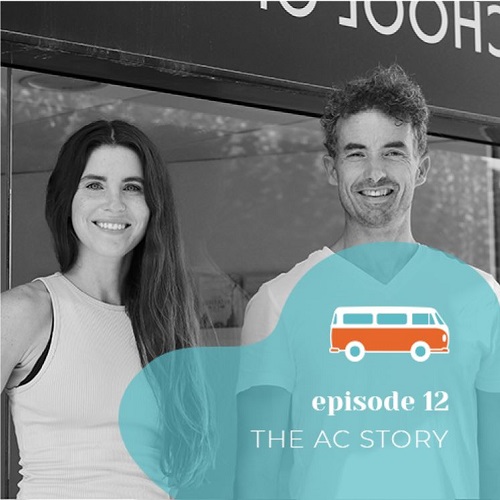 Bec: Hi there, it’s Bec here. I’m one of the teachers at AC Inglés and also a producer of the Into the Story podcast. Regular listeners will be used to hearing Bree’s voice at the beginning of each episode. But today I’m here to introduce our 2 very special storytellers, Raül and Bree herself. Without giving too much away, I hope you enjoy the show and let’s get into the AC story…

The year was 2010, Raül was on his way to Australia to pursue a dream of living in a surfer’s paradise and Bree had left Canada and moved to Spain to do a year abroad after University. In this episode, we’ll hear about the moment those plans changed and how their idea of building an English academy together became a reality.

In today’s episode, Raül shares the memory of his childhood friendship with Georgina that sparked a curiosity in different cultures, English language and Kitkat chocolate bars.  On the other hand, Bree tells us how she came to discover language teaching as an adult and how she dealt with criticism and feeling imposter’s syndrome as a young entrepreneur. This is not so much a story about AC the business. Instead it’s a story about the couple who built it. We’re calling this episode, ‘How to get from A to C’.

Before we begin listening, let’s talk about some of the vocabulary and expressions you’ll hear Bree and Raül say:

Firstly, a flat-share. A flat-share is an expression we use in English to describe an arrangement between 2 or more people living together in the same flat or apartment. You’ll hear Bree talk about living in a flat-share when she first arrived in Barcelona.
Next, a locker room. Bree uses this expression, locker room, to describe the appearance of the first English academy that she and Raül opened. Lockers are those small secured cupboards – una taquilla – where students or people at gyms keep their bags safe. A locker room.
Exhausted. Exhausted is an adjective that we use in English to mean 2 key things. It can mean very tired or it could mean that all your supply of something is used up – se dice agotado en español.
Next, Imposter’s syndrome – This term describes a feeling of self-doubt or feeling like you are not intelligent or worthy enough to be doing something successfully. Many people often feel imposter’s syndrome when they first start at work. You’ll hear Bree describe feeling imposter’s syndrome in the early days of running AC.
And finally ‘go with your gut’. This expression means to trust or follow your intuition or instinct. For example, you could say that, when making difficult decisions, I often go with my gut instead of following the advice of others.

And, as always, you have a full transcript, vocabulary list, and listening comprehension activities on our website acingles.com, that’s la letra a, letra c, ingles punto com. OK let’s get into the story…

Raül: My story with English started when I was little. We had these neighbours who were an English family. They had this, this daughter, called Georgina, and we became really good friends. So I spent a lot of time in their house. For me, everything was different. They brought Kitkats. It was such an amazing taste and it was such a special thing that, you know, something that didn’t exist here and suddenly you try a Kitkat and then she gave me one, you know every one month or something like that. One bar of Kitkat, not the whole package right, and I was like, ‘oh my god this is the best thing I’ve ever tried in my life’. Everything was so interesting now so I became familiar with all these things. They were speaking English all the time between them. I like, I heard all the time, ‘Georgina, lunch is ready!’ and they were speaking to me in English. All this little, little contact with not only culture and… but also the language changed something inside of me.

I have a background in engineering working in construction with retaining walls and bridges. But I was always thinking about businesses, sales, marketing. One day, while I was doing this complex deep foundation calculation, I overheard the sales guy speaking on the phone and I thought, I should be doing something like that. In 2009, during the crisis, I decided to take the opportunity to quit and I wanted to move to Australia. I thought it was a really cool country. So I go there for a few months, discover the country, it’s an amazing country, its amazing people and then I come back to get my papers together and I get invited to a dinner. I met, I met Bree there and everything changed.

Bree: I was living in a flat share and my roommate invited me to go to a dinner and I get there and there’s this guy there and he invites me to do a language exchange. So at this time I speak zero Spanish and he comes up to me and he asks me my name, where I’m from and if I would like to get together sometime to, to practice Spanish and he can practice his English. My original plan of staying in Barcelona for 1 year, umm, it quickly became apparent that it wasn’t going to be just one year and I was, in fact, going to stay.

I was just a year out of University and I had studied psychology because I think I always wanted to connect to people in a meaningful way but for me there was just a certain heaviness to that job. I remember getting home at the end of the day and being exhausted so when I got a job teaching English, right away it felt like exactly what I was supposed to be doing.

Raül: Bree and I, started… started talking about opening a business together really early in our relationship.

Bree: Yeh I think that we are one of those couples who are just super different from one another.

Bree: Coming from two different cultures but I think it’s also the fact that we approach problems from literally opposite angles…

Bree: …which turned out to be very complementary to running a business together. I remember we were sitting down one day and we were making a list of what we’re good at doing but also what we use like doing and we decided to open an English school. And I think really the decision was made from one day to the next and we found ourselves looking for a little ‘locale’, a little commercial space.

Raül: I don’t know how to describe it.

Bree: Like a big shower because it was all tile. But we thought it was perfect because it had a little reception and it had a classroom. We get to space and we’re really excited. We hang posters everywhere. The whole town was covered in posters. The first day comes and we have a lineup of students out the door.

Raül: Bree was there teaching and I was in charge of… of the rest. At the beginning, I still had a full-time job during the day and then I was at the school in the evenings. I remember, one day, getting out, getting out of work. It was like 11:30 or almost 12. I remember, walking back home and cry because I couldn’t, I couldn’t handle it anymore. My body was exhausted. I decided to quit my job and start fully into AC.

Bree: I remember, one day I was teaching in the classroom and I heard somebody come in the door and start speaking louder and then louder and louder until I decided to come out of the classroom and and see what was happening and I saw the mother of two boys who had come and we’re trying to get English classes but in the end we couldn’t find a place for them in our schedule. And this mother was very angry. She said that we had basically left her without classes. And at this time starting a new business I think it’s really normal to have this feeling that, that you don’t belong, that you’re not qualified and that it’s not going to work out because you’re not smart enough or talented enough. And she yelled at me. Basically saying all of the things that my imposter syndrome was saying. And I took away from, from that early lesson that building a business, building anything, you put yourself in a very vulnerable position. But you have to, you have to have a thick skin and you have to believe in your project and do the best you can and move forward.

Raül: We, we start having more and more students so we see that… that little space that we had divided into two. We had to remove the reception basically. Then there was no reception. We had a problem. But there was another door in that little, little space that had a little hole. We said let’s make this hole the reception desk. The only problem was that the bathroom was behind. So students went to the bathroom and I was just there. So it was real embarrassing for me and for the students and even more when new clients came to ask and then they saw somebody coming out of the bathroom.

Bree: Eventually we moved into a bigger school where we did a renovation and this gave us a chance to create a school exactly how we wanted it. So all of the classrooms that were along.. that were exterior, they would be all glass and the interior ones but also have glass so you could see you from one room to another. And Raül also had clear that he wanted a space where students could come in and they could drink tea or a coffee.

Raül: Really I thought about tea time at Georgina’s house when I was little. That time of the day to slow down and connect. In a way I wanted to engineer a space to give students a chance to live in English. Our philosophy from the beginning was to, to learn English through, yes through classes, but also through living in English.

Bree: We started creating video classes that were directed at Spanish speakers. We started building an online course.

Raül: In this new phase, 2020. We are now 100% online. I feel the same ‘ilusión’ I had living next door to Georgina when I was little. That feeling of amazement at being able to connect with a different culture and a different language. You just have to feel your guts and and…

Raül: Ah no feel your guts no follow your gut.

Bree: Go with your gut

Raül: You just have to go with your gut..s. Gut or guts?

Bree: Guts is for gory whereas gut is more ‘tu intuición’.

Raül: So you just have to go with your gut.

‘When building a business, building anything, you put yourself in a very vulnerable position. But you have to have a thick skin and you have to believe in your project and do the best you can and move forward.’

Go with your gut en español

‘…this new phase, 2020. We are now 100% online. I feel the same ‘ilusión’ I had living next door to Georgina when I was little. That feeling of amazement at being able to connect with a different culture and a different language. You just have to… go with your gut.’ 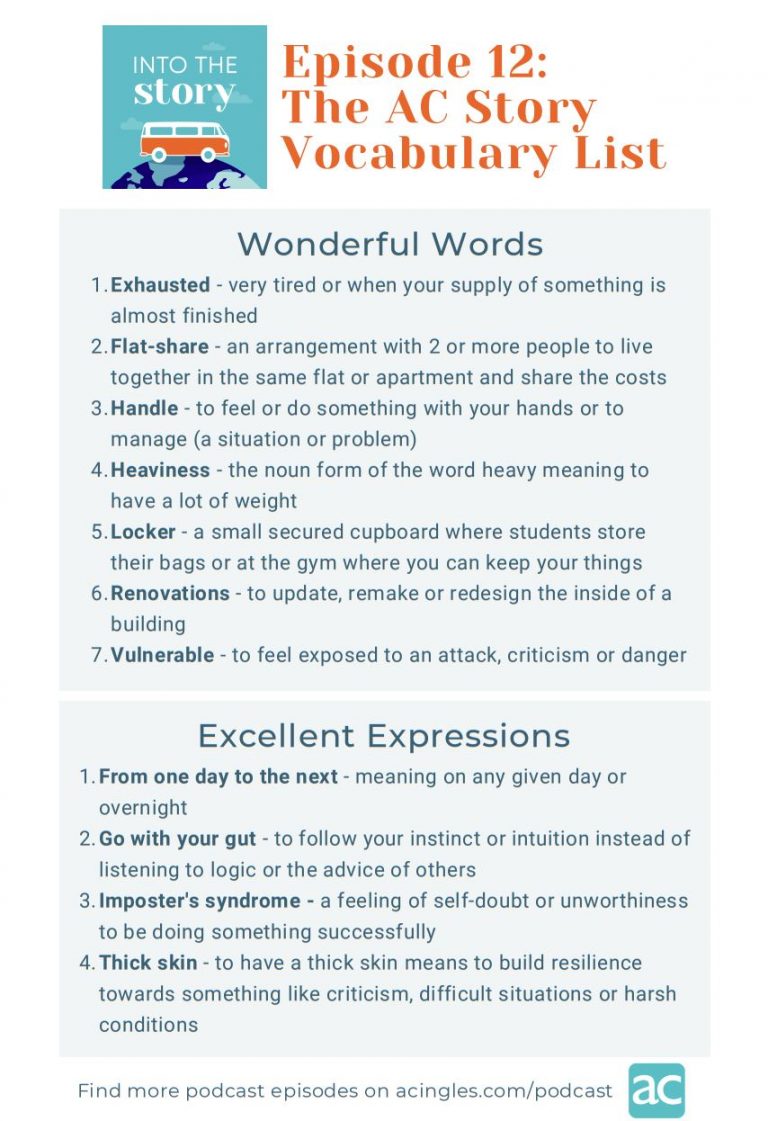 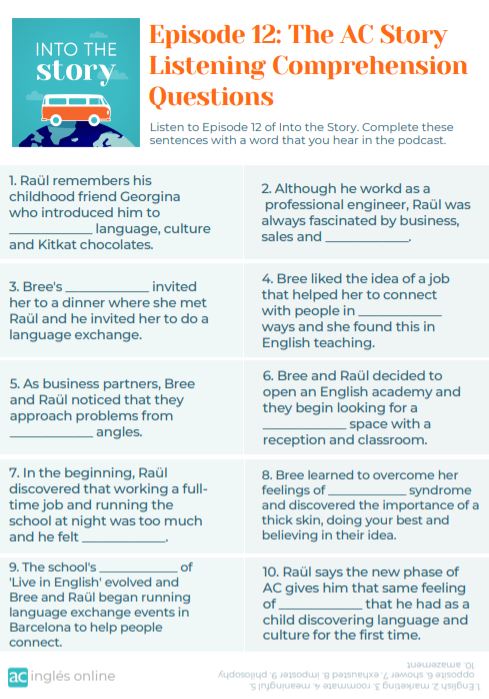 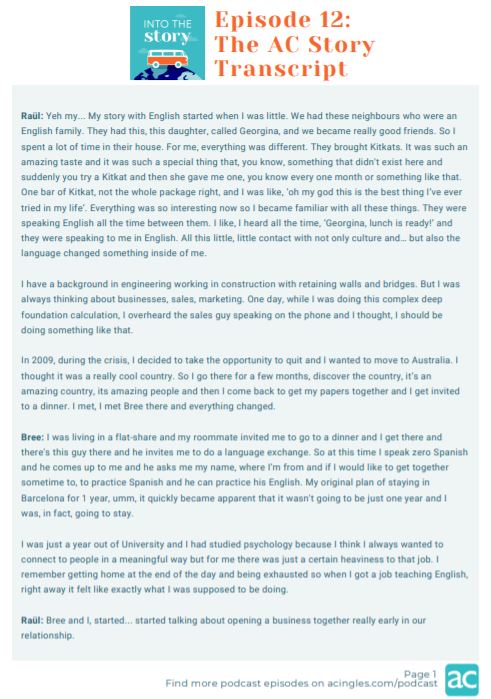