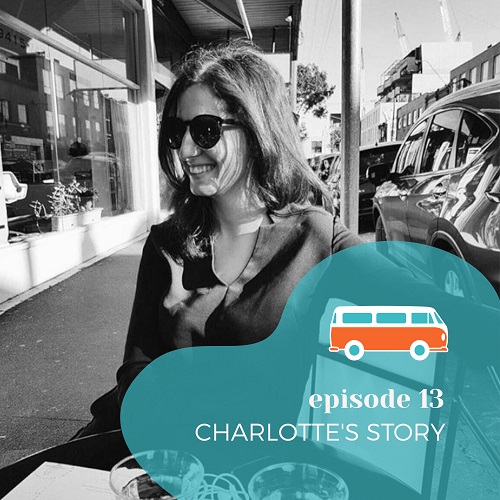 Bree: For many young graphic designers, including today’s guest, Charlotte, working and living in New York City is a dream come true! When a 2 month internship came along, Charlotte jumped at the opportunity to move to Brooklyn to try to make her American dream a reality.

In this episode, we’ll hear about Charlotte’s sudden change of plans and how she ended up rejecting a glamorous job offer in New York for a year of adventure and self-realization in Australia, a country on the other side of the world that she knew very little about. Today, Charlotte tells us what she learnt from her fork in the road experience and how far she’s come. We’re calling this episode, ‘Pack up, Push forward’.

Before we begin listening, let’s talk about some of the vocabulary and expressions you’ll hear Charlotte say:

Firstly, handle. In English the verb handle is used as a synonym for manage. We often talk about handling a problem or handling a situation. Handle can also be used as a noun to mean a tool to grip something with, like a bike handle or a door handle.
Next, sponsorship. Charlotte talks about receiving sponsorship from her employer in New York to go and work there. In this situation, sponsorship is used as a noun to refer to the support that the company offered Charlotte to allow her to stay and work in the United States.
Working-holiday visa. A working-holiday visa is a type of permission that allows someone to visit a country and stay longer than the average tourist. It is a common visa for travellers going to Australia. People with a working-holiday visa have the opportunity to work short-term jobs to save some money, hopefully allowing them to travel around the country. Working holiday visa.
Loan – The word loan can be used as both a verb and a noun in English. As a verb, loan means to give money or an object to someone with an expectation of it being returned in the future. A library loans books. A loan is also what we call the money or thing that is borrowed. You’ll hear Charlotte talk about taking out a loan to fund her trip to Australia.
Finally, embrace – the word embrace has 2 key meanings in English. It can mean a hug, un abrazo o abrazar or it can mean to accept willingly. For example, Charlotte talks about embracing new opportunities and unexpected moments in life. Embrace.
Just a quick note about today’s audio. On Into the Story we aim to showcase the stories of English speakers from all language backgrounds, from all around the world. In Charlotte’s case, she is currently in Melbourne, Australia, far away from her home countries France and Italy. We spoke to Charlotte online so you may notice that the sound quality isn’t the best. In any case, we are sure that you’ll enjoy listening to Charlotte’s lovely accent and her equally lovely story.

As always, if you want to get the most out of, si quieres sacar el máximo partido de, Charlotte’s story you have a full transcript, vocabulary list, and listening comprehension activities on our website acingles.com, that’s la letra a, letra c, ingles punto com. OK let’s get into the story…

Charlotte: My name is Charlotte. I’m an Italian and French graphic designer. In 2017, I had an opportunity to go work for a designer in New York City. New York City for me was a little bit like the dream city for every designer and even just like walking through the streets of Brooklyn and seeing like all the… the creative studios, the galleries and all the opportunity that the city can bring to a designer. New York City can be a huge step for my career.

My job was quite complete but it wasn’t exactly what I loved to do in my field. While I was in New York I had a lot of spare time with this work. It wasn’t really a full-time job so I decided to apply for a lot of work there and at the end of my journey there, at the end of my 2 months, a company called me and offered me the sponsorship.

I remember I was in this small little bedroom in Brooklyn and I was just super excited, of course. I arrived, you know, to do my goal. So this company was a communications company in New York. A basic graphic design and communications company. But the position was interesting, I speak with the founder. We have even a really good feeling. We were quite connected. He’s French so I speak a little bit in French with him, everything was very well.

I received the contract and the contract is not what we spoke about. The conditions are not great, the salary is very low and so I get stressed and I was quite anxious because I didn’t know a lot how to to handle the situation so I called some of my American friends that were living in New York and I asked them, ‘do you, do you know if it’s something usual or not?’ and they all told me that no this wasn’t at all usual and even more with a salary as low, like, in New York it’s impossible to live in. I felt very bad. I felt like, very disappointed.

I decided to decline the offer with no plan B like I really didn’t know what to do. So I decided to check online and I saw that there is a visa the Working Holiday Visa with Australia. It is quite easy to have it. I think I never thought about Australia in my life, really. I know it was there. I knew there were some kangaroos there and the beautiful landscape. That’s it. For me it was way too far from my home country. I didn’t want to go as far as that. But maybe it can be a good challenge. I saw that Melbourne is a really creative city. I had no plan b so why not, let’s try it.

So I organise everything. I even like leave my apartment, sell all my furniture, everything. I buy the tickets, the flights and I receive a phone call from a company with whom I was in contact with in New York and they called me and offered me the sponsorship. I… I was a little bit blocked, I didn’t know a lot… at that moment I was very honoured to have this second sponsorship but in the same time I was feeling like I wanted to go to Australia.

I wanted to live this challenge. I wanted to put myself in risk, you know, in danger and so they explained to me the contract. The contract is even more very interesting because it’s a really good salary with great conditions. It was a contract for 4 years. So it was a big changing… was life-changing, you know. Or I got to Australia, I have a loan, I don’t have a job. Really no security. Or I go to New York with a 4 year contract so the opposite, a lot of security and I… I choose Australia!

I arrived in Melbourne. It’s beautiful weather, we start to meet some people so it was nice. It wasn’t as easy as I expected, like I start to live in a home with six or seven other people and just one bathroom. So quite… quite funny in a sense and I start to sell Christmas and New Year’s Eve hats on the street and it really put me inside the Australian vibe because I met a lot of people. I had to stand there with 2000 hats so 100 in each arm. One hat, of course, I was wearing to sell it, a little cup to receive the money in one hand and that was it!

It was very far from what I was looking for in Melbourne but it was fun. It was a fun first job but thank God I didn’t have to do that for one whole year. Life wasn’t as easy as I thought but it also was what I was looking for. I was feeling good. I was out of my comfort zone. I was fighting for what I wanted really deeply inside of me and I also realized that when you are alone when you’re really far from your home you really discover what you want. I understood what I wanted and I just started to fight for it.

Right now I’m in Melbourne, I met my boyfriend after a few weeks that I arrive in Melbourne, I’m working in the field that I love so graphic design and web design and I’m just feeling very grateful for all this experience. I think I really learned about the experience of coming to Melbourne by seeing that yeh maybe sometimes life is not what you planned but you just have to embrace it.

“I was out of my comfort zone... I also realized that when you are alone when you're really far from your home you really discover what you want.”

‘Right now I’m in Melbourne, I met my boyfriend after a few weeks that I arrived in Melbourne, I’m working in the field that I love, so graphic design and web design and I’m just feeling very grateful for all this experience. I think I really learned about the experience of coming to Melbourne by seeing that yeh maybe sometimes life is not what you planned but you just have to embrace it.’ 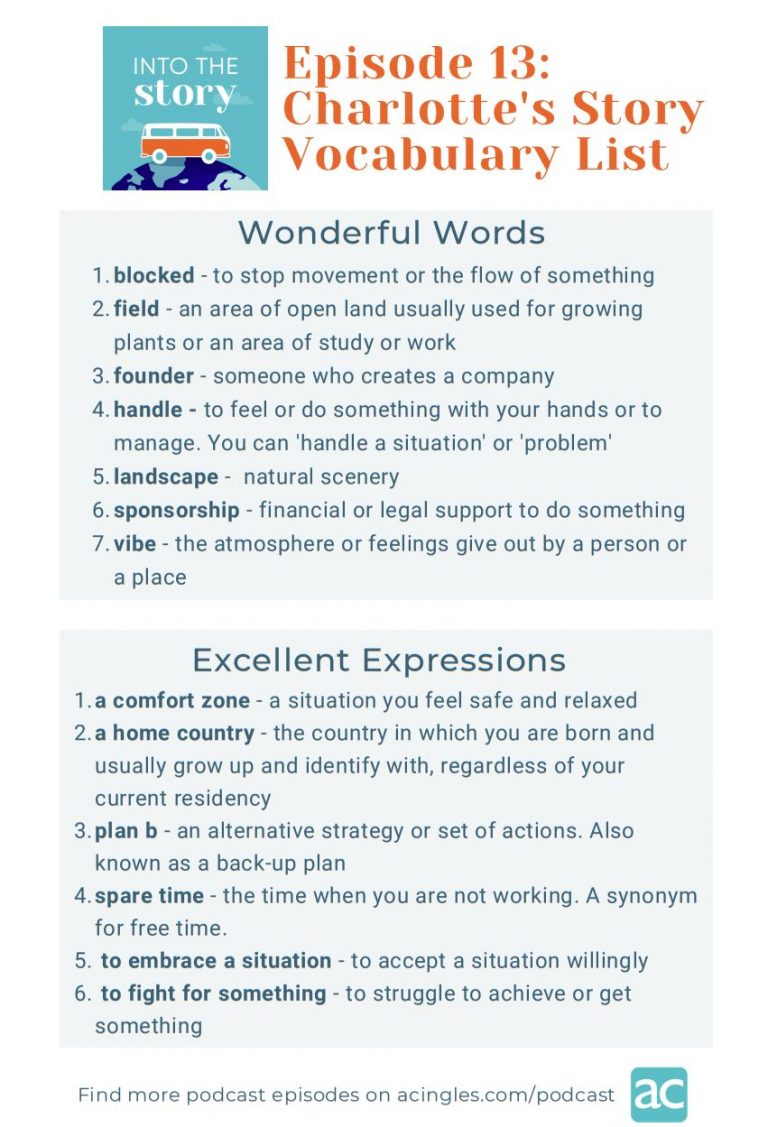 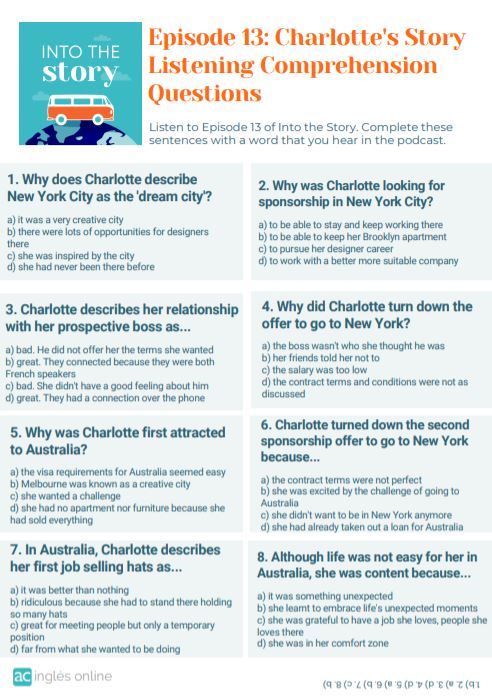 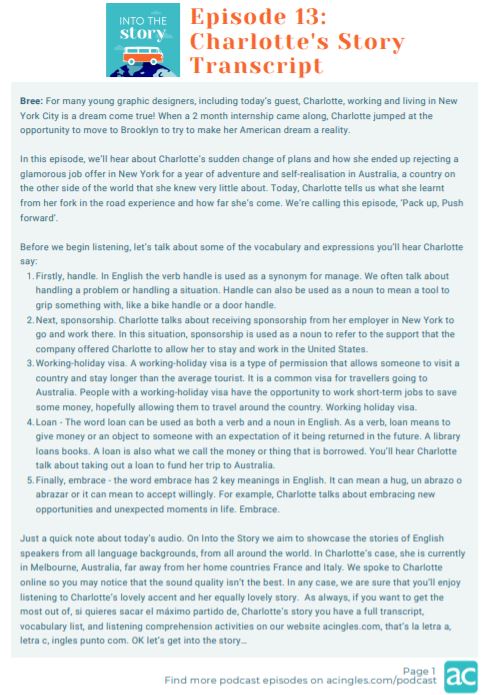