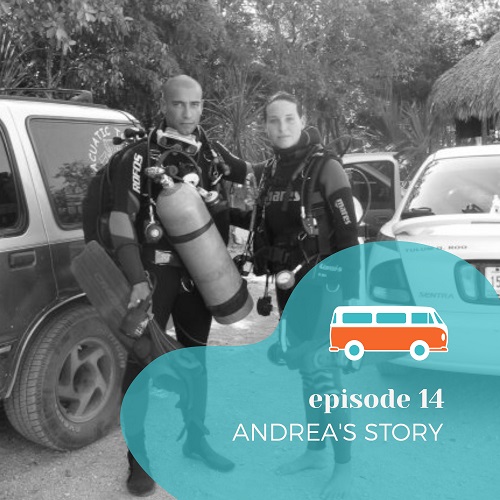 Bree: Thanks to its vibrant sea life and stunning coral, the notorious Playa del Carmen, Mexico attracts scuba divers from all around the world. At 18 years old, our storyteller, Andrea, set off on her own adventure in the Gulf of Mexico to explore its oceans and become a professional diver.

In today’s episode, we hear about how an innocent day of sunshine and suntanning on the beach resulted in Andrea deep underwater with her daredevil friend Marco, both of them running out of air and wondering why she didn’t have a bathing suit on! You’ll hear Andrea describe the magic of being so deep in the ocean and the importance of putting safety first as a scuba diver. We’re calling this episode, ‘ Underwater, Under pressure”

Before we begin listening, let’s talk about some of the vocabulary and expressions you’ll hear Andrea say:

Buoyant – Buoyant, spelt b-u-o-y-a-n-t, is an adjective we use most commonly to describe something that is able to float in a liquid or stay at the surface of water. In Andrea’s story, you’ll hear her talk about using weights in her pockets to stop herself from becoming buoyant in her wetsuit. Buoyant
Sheer – Sheer has a few meanings in English. It can be used to describe something light or delicate as in ‘a sheer fabric’ or it can be used as a synonym to pure as in ‘sheer happiness’. In today’s episode, Andrea describes a sheer drop-off underwater – una caída alta de golpe o un acantilado escarpado. Here she’s talking about an underwater cliff that goes straight down. With words like sheer, it’s important to listen to the word in context to determine its meaning.
Stunning – Stunning is an adjective that we use as a synonym to words like ‘impressive’ or ‘amazing’. For example, you could say that from the top of the mountain, we had a stunning view of the landscape.
To gasp for air – This phrasal verb refers to the action of trying to catch your breath, usually with your mouth open. Runners often gasp for air after a race or if you have been underwater for a long time, you will probably gasp for air when you come to the surface again.
And finally, to sink – To sink refers to the action of falling to the bottom of the sea or some form of water. You’ll hear Andrea describe the moment of watching her weights sink into the ocean.

As always, if you want to get the most out of, si quieres sacar el máximo partido de, Andrea’s story you have a full transcript, vocabulary list, and listening comprehension activities on our website acingles.com, that’s la letra a, letra c, ingles punto com. OK let’s get into the story…

Andrea: I was 19 years old living in Playa del Carmen, Mexico and I was in the middle of taking my divemaster course. This is a course that allows you to take scuba divers on an excursion, a dive. I had a friend who was an instructor at the school that I was taking the course at and his name is Marco and he was very adventurous, fun, exciting, Italian that lived, that came from Rome and he was doing a season at this school.

So it was one of my days-off and I was at a beach. So I was suntanning and I wasn’t around anybody. It was just a very remote beach. Anyway a beautiful day and I was wearing ah, very very small bottoms… almost non-existent bottoms string-like I would say. Anyways I was suntanning on my sarong. That’s all I had and from a far distance I heard Marco yelling my name, ‘Andrea!’, he was so excited, ‘Andrea, Andrea’ and like, ‘come on let’s go’ so I put my sarong back on, wrapped up, stood up. He said, ‘come with me we’re going diving’. He said, ‘we’re doing a really deep dive on the wall’.

So the wall is just a sheer drop off. Probably about 200 feet from the shore. He had hired a 14 year old boy, with his ‘penga’, which is a small boat, to take us on the dive and I just quickly said well I don’t have any of my gear. I don’t have my wetsuit and he’s like I have everything ready at the dive shop. He said you can use my wetsuit. So his wetsuit is a 5mm meaning that it’s just the thicker and a thicker wetsuit makes you more buoyant. In any case, I put his wetsuit on and I put extra weights in my pockets. He had his dive watch, the dive watch just controls your time, your depth.

We jump in the water. Unfortunately my weight belt fell off okay that’s fine we can deal with this cuz I had a couple of weights in my pocket. This dive is absolutely phenomenal that water is so clear. I want to say that visibility is well past a hundred feet. It was absolutely beautiful, stunning.

So we’re just going further down further down kicking, kicking I’m following Marco and I just now, I start hearing his dive watch beeping beep beep beep because we are way too deep 120 ft., 140 ft., 180 ft. It’s just becoming phenomenal I mean the corals are just different than they are closer to the surface. It was so clear and it started getting really dark. Beautiful deep, deep blue and you cannot… it was just thousands of feet to the bottom.

I started getting Narcosis. It’s something that happens when you dive when you go to those death. A lot of people explain it as being kind of drunk and quite happy and that’s also a reason why going as deep is so dangerous and it made me feel like I was kind of like in Alice in Wonderland like just entering this place that was so magical.

At this point I remember Marco told me to stop and he was, believe it or not, going to go deeper so I just sat there and I looked up at the water above me and look down. I was just watching Marco and listening to his beeping getting quieter and quieter. I was just there by myself and I remember looking up and I could just almost see the surface of the water was so clear.

I just remember just seeing the sky almost and you couldn’t even besides the bubbles that you were exhaling, it was crystal clear you couldn’t even see it… didn’t even feel like you were in water. When I heard Marcos watch the beeping get louder and louder and he was, he was coming closer and closer to me and honestly he just grabbed the back of my tank and we just started ascending. We started going up quite fast.

Normally the process would be a slow kicking. You basically want to slowly come to the surface and you always have to do a safety stop and because of the depth we went to we had to do 4 safety stops. At about the third safety stuff, I started to become incredibly buoyant. This is what I really started noticing that my lack of weights was a huge problem. I was really running out of air. I was struggling. I was breathing way too much just to stay down.

I was swimming upside down trying so hard to stay down we were holding each other’s vests. The currents were getting a little stronger. While I was upside down, the two weights that were in my pockets fell out. Now, we’re, we’re watching these weights just sink into the abyss and we just look at each other in the face and we knew this was a huge problem.

So now I cannot stay down. I am completely buoyant because I’m just swimming so hard and we’re literally looking at my air. It’s just dropping. I’m a minutes away from running out of there I was quite scared and Marc was holding on to me and I run out of air. I take my regulator out and I grabbed his alternate and now we’re both breathing on his tank. We  somehow communicate at this depth that I need to get rid of this wetsuit. This wetsuit is just like holding up a ball under the water at this is what it’s feeling like but it’s wrapped around my entire body.

So I turn around so he can unzip it I peel, I’m peeling it off and I completely even forgot I was naked. I turned, once I flip upside down to peel it off my ankles, I was just looking at his eyes. His eyes were so wide because they had no idea that I didn’t have a bathing suit on underneath. But I just remembered laughing it was quite funny and basically now we’re looking at Marco’s air supply and it is going so fast because now there’s both of us breathing off of his tank and I, I had to go, I had to go up 44 ft all I had in my mind was getting to the surface and getting that second breath of air.

I’ve never felt more like Little Mermaid my entire life when I burst out to the water, I just remembered gasping for air and all I could see was this big boat. There’s seven young American guys on a fishing charter and they were all standing there, just staring at me with their mouth open. Like where the heck did this girl come from! And I just pulled myself up and fell in, like, like a like a fish and I just laid on my back and I was just breathing and I was exhausted and then I looked up again and these guys their jaws were still open. They had no idea where I came from; they were probably very confused about why I was naked.

Now we’re looking for Marco’s levels. Before we could even put too much thought into it he came up we were helping him onto the boat. Now we’re both sitting and hugging each other and we’re like touching each other’s faces saying, ‘Are you okay? We just started laughing. We cannot believe what has happened. I wish there was more of a lesson in this story but it’s probably just kind of stupidity… and don’t do it, don’t go to 290 ft on one tank.

‘I've never felt more like Little Mermaid my entire life when I burst out of the water. I just remembered gasping for air and all I could see was this big boat.’

To gasp for air

‘…when I burst out to the water, I just remembered gasping for air and all I could see was this big boat. There’s seven young American guys on a fishing charter and they were all standing there, just staring at me with their mouth open. Like where the heck did this girl come from!’ 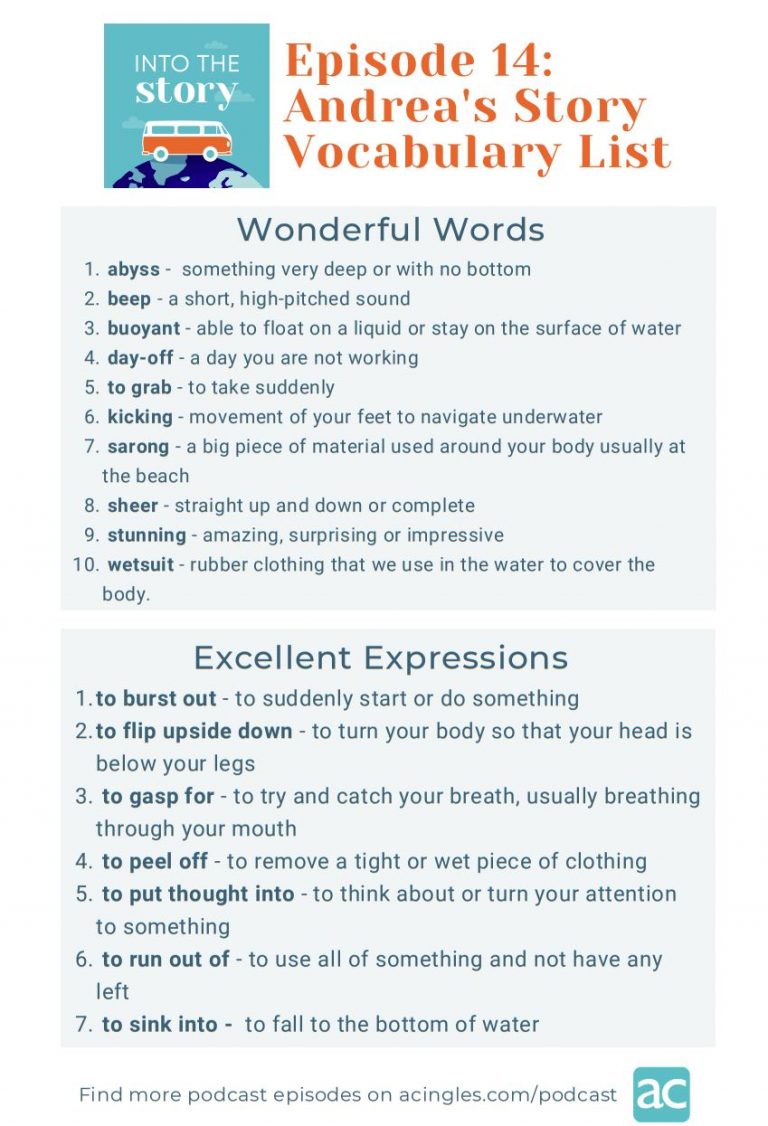 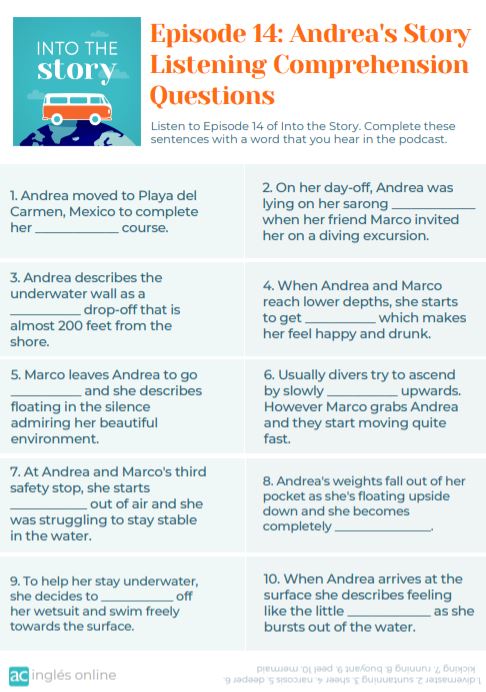 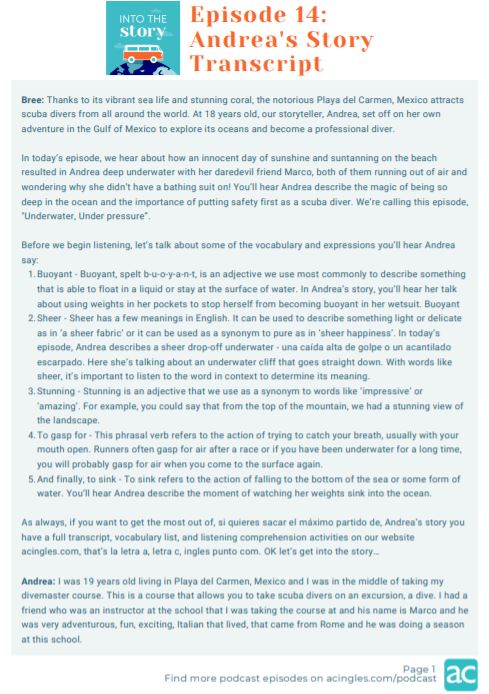